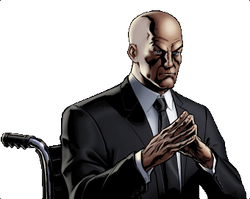 Mutation: it is the key to our evolution. It has enabled us to evolve from a single-celled organism into the dominant species on the planet. This process is slow, and normally taking thousands and thousands of years. But every few hundred millennia, evolution leaps forward.

Charles Francis Xavier was the mutant son of wealthy nuclear researcher, Dr. Brian Xavier, and his wife, Sharon Xavier-Marko. While gestating in his mother's womb, Charles' twin was recognized by Charles as an evil presence and he preemptively tried to kill it with his nascent psychic abilities, causing the fetus' miscarriage. After Dr. Xavier's death in an accident, Sharon married his colleague Dr. Kurt Marko who brought his son by a previous marriage, Cain Marko to live in their ancestral mansion. Dr. Marko favored the gentle, smart Charles over his own son, which led to Cain constantly bullying Charles and Dr. Marko secretly beating Cain. Sharon married Dr. Marko because she believed that it would be best for Charles.

Charles' telepathic powers began emerging when he was still a boy, around ten, and, as he grew older, he learned to control them. As a child, Charles met a shape-shifting girl named Raven, who had broken into his family's mansion and was scrounging for food. Overjoyed to meet someone else "different" like him, he invited her to live with his family.

Due to the immense psychic energies emanating from Charles' head, he became bald at a young age. With his powers, Charles had discovered that Dr. Marko cared only about his mother's money, admitting that he was jealous of Dr. Xavier's wealth. Dr. Marko quickly grew neglectful of Sharon, driving her to alcoholism, and abused both Sharon and Cain. Charles linked his mind to his mother's, in a effort to share the abuse with her and alleviate it. Charles, on one occasion, found himself experiencing the anguished thoughts and emotions of Cain, after Cain had been beaten by his father, which only led to Cain becoming more aggressive toward him and Charles feeling Cain's pain firsthand, but the inexperienced young Charles could not control or end his contact with Cain's mind at this time. Sharon died shortly thereafter, of a broken heart, leaving Charles to live with his step-father and abusive step-brother.

Later, a fight erupted between Cain and Dr. Marko, that caused some of Dr. Marko's lab equipment to explode. Mortally wounded, Dr. Marko dragged the two children out before dying, begging forgiveness for not saving Dr. Xavier when he had the chance, and telling Charles to keep his powers secret from Cain. Cain was standing over them and heard of Charles' gift, which led him to believe that Charles had invaded his thoughts deliberately. From then on, Cain regarded Charles as his enemy.

A natural genius, Charles completed high school at sixteen. He attended Oxford University accompanied by Raven. He earned Ph.D.s in Genetics, Biophysics, and Psychology. After completing his thesis on genetic mutation, he was approached by Agent Moira MacTaggert of the CIA for his help in stopping a mutant named Sebastian Shaw, who was working with the Soviet Union. MacTaggert introduced him and Raven to the CIA, where they proved to her chief that mutants existed and Shaw was a threat. The chief refused to employ the help of the mutants, but a "Man in Black" offered to sponsor them.

Charles accompanied MacTaggert, MiB and a US Coast Guard assault team to arrest Shaw on his yacht. During the attack, Charles' telepathy was blocked by Emma Frost. They also encountered Erik Lehnsherr, who was launching his own solo attack on Shaw at the time. When Shaw escaped in a submarine, Xavier prevented Lensherr from killing himself in an attempt to stop it and brought him to the CIA's secret "Division X" facility.

There they met young scientist Hank McCoy, a mutant with prehensile feet and enhanced intelligence, whom Xavier identified as a mutant. He then used a mutant-locating device designed by McCoy called Cerebro to find and recruit mutants for training to stop Shaw. Refusing CIA help, he and Lensherr traveled the world discovering various mutants. They also approached Canadian mercenary James Howlett, but he immediately rebuffed them.

Lensherr and Xavier tried once again to find and capture Shaw, who was supposed to be meeting with a Soviet general. They discovered that Frost had attended the meeting in his place, and Xavier and Lensherr captured her instead. Interrogating her led to the revelation that Shaw intended to spark a third world war to wipe out humanity, leaving mutants as the dominant species. Meanwhile, the other Hellfire Club mutants attacked Division X, turning Angel to their cause and killing Armando in the process. With the facility destroyed, Xavier relocated the mutants to train at his family mansion. During their stay there, Xavier applied his telepathy to help Lensherr reach new heights of his magnetic ability.

Xavier's new team was soon called to action during the Cuban Missile Crisis when Shaw engineered a stand-off between amassed United States and Soviet navel forces. A Soviet freighter had been forcibly commandeered by the Hellfire Club who were attempting to run the American blockade. Xavier took mental control of a Soviet officer and had the man destroy the freighter, thus averting a nuclear catastrophe. Lensherr pulled Shaw's submarine from the water. The submarine and the X-Jet both crashed shortly after, bringing both teams into direct conflict with each other. Lensherr found and seemingly killed Shaw.

Xavier found his attention turned to the new threat of the two navel fleets with crews who were rapidly becoming fearful of the mutants. The ships launched a combined missile strike against the mutants, which Lehnsherr quickly turned back on them. Xavier kept Lensherr from destroying the ships, but when MacTaggert fired a gun at Lensherr, a deflected bullet hit Xavier in the spine, crippling him from ever walking again. A remorseful Erik left with Mystique and Shaw's enforcer Azazel.

Later, a wheelchair-bound Xavier returned to the mansion where MacTaggert promised never to reveal his location. They kissed, whereupon Xavier wiped her memory of the events. He soon after founded Xavier's School for Gifted Youngsters and ran from his family's Westchester mansion, which had been converted into a base of operations at which he trained mutants for his personal strike force known as the X-Men. The base included subterranean medical labs, a training facility called "The Danger Room," an aircraft hanger, and Cerebro.

William Stryker sent his son Jason to Xavier's school in hopes of ridding his mutation, regarding it as a disease that he believed needed be cured. Xavier had no interest or belief in 'curing' mutants, which angered Stryker. Later, Xavier helped liberate the mutant children held prisoner by Stryker at Three Mile Island. He took them in an flew off in his helicopter with Scott Summers and the sister of Kayla Silverfox. Summers would go on to lead the X-Men.

After finding Jean Grey, Xavier began controlling her with mind blocks because he believed her class 5 powers were too much for her to handle.

Military Training: Charles served in the United States Military, secretly employing his abilities to specialize in search and rescue missions.

Expert Fighter: In his travels in the East, he became a proficient hand-to-hand combatant and gained knowledge of pressure points.

Retrieved from "https://marvelcomicsfanon.fandom.com/wiki/Charles_Xavier_(Earth-1010)?oldid=220249"
Community content is available under CC-BY-SA unless otherwise noted.