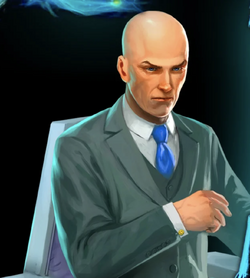 If you really get down to it, there is no difference between us and them. We're all just fighting for survival. So why can't we all fight together?

Charles Xavier and his mother immigrated to the United States of America when she married a scientist named Kirk Marko, whose son, Cain, took an instant disliking to Charles. When he turned 12, Charles began hearing voices in his head. At first, he believed he was going insane, but as time went by, he came to realize the voices were in everyone else's heads, and he was hearing their thoughts.

Throwing himself into trying to understand what he was, Charles began studying genetics and came to understand that there was a subspecies of humanity called Homo sapiens superior, more commonly called "Mutants". Charles then dedicated the rest of his life to finding others like him and giving them a place in the world where they can belong.

Over time, Charles set up a safehouse at his family's old home in Westchester. It wasn't long before he found himself adopting young mutants with nowhere to go, and he became the loving father of two young girls named Jean Grey and Ororo Munroe. He eventually met and befriended a man named Erik Lehnsherr, who was capable of manipulating metal with his mind.

Erik and Charles became very close on a spiritual level, and made plans to usher mutantkind into a new age. However, over time as they recruited more and more mutants, such as Hank McCoy, Warren Worthington III, and Mystique, Charles started to realize that Erik did not share his view of equality. He wanted mutants to rule the world and render humanity extinct. This fundamental disagreement in ideology resulted in them splitting up, and Erik took Raven to form his own Brotherhood of Mutants.

Trying to recover from this loss, Charles ended up saving Raven's son, Kurt, from hardships in his own village, and a young man named Scott Summers. After the young mutants started bonding and training together, Erik returned under the name "Magneto", and kidnapped Charles in an attempt to sway him over to his side.

However, Charles's students banded together and went into battle against Magneto's Brotherhood to rescue him. In the ensuing battle, Magneto accidentally ended up paralyzing Charles, which resulted in him accepting defeat. He then allowed Charles to return with them, but vowed that one day he would claim victory for their species. Charles made a vow of his own, that he would always be prepared to protect humanity. His students dubbed themselves X-Force, and as time went on, they continued recruiting more and more young mutants. He came to realize this was his true purpose; to help mutant children accept themselves and use their powers to contribute to society.