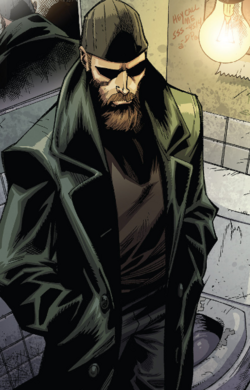 Charles Hinton led a normal life with his wife Polly and their daughter Robin until he underwent Terrigenesis. He earned the ability to project a series of visions on anyone he touched, and they all involved someone's death. Because of this, he grew fearful of touching others and left his family, turning to a life of homelessness.

While hanging out at the back of a grocery store, he was approached by its owner, Edwin Abbott, who told him he must leave because his presence is bad for business. The businessman feels sympathy for Hinton and offers him money, but, when the two physically touch hands, Edwin Abbott gets a vision of how he dies and the involvement of Daisy Johnson.

S.H.I.E.L.D. monitors the 911 call Abbott makes and goes to his location; Johnson has no idea who Abbott is or how he knows her name. Abbott tells Johnson that he had a vision of death as he was killed by HYDRA; suddenly a HYDRA QuadCopter arrives to capture Charles. In the ensuing firefight, Abbott is killed; as Charles is captured, Johnson touches his hand and gets a string of different futuristic events that all lead to her death.

Hive and Gideon Malick, taking Charles along, go to the Transia Corporation Building to buy the company from Rowan Hamilton. Charles is made to touch Hamilton and shows the businessman the death of his colleagues from the parasitic release of Hive. Malick puts on the Transia Corporation Exoskeleton, and on Hive's command, kills Hamilton, the first time Malick has ever killed a person personally.

Johnson is successful in infiltrating the Building and, with some timely assistance from Director Coulson, gets to the roof where Charles is. However, Malick, strengthened by his exoskeleton, is there and begins to pummel her mercilessly. Just as Malick goes for a killing blow, Charles touches Malick and gives him a vision; this gives Johnson enough time to emit a blast that ends the battle, but not before Malick gravely injures Charles. Johnson touches the Inhuman and sees another vision: a golden crucifix floats inside a spacecraft high above the Earth as a S.H.I.E.L.D. agent dies in an explosion.

In order to keep an eye on his daughter and helping other Inhumans, as well as the people who helped him, he joins S.H.I.E.L.D..

Telepathy: Charles is a tactile projecting telepath, involuntarily imparting his vision of the touched person into their own mind.

The strain of witnessing the deaths of others before they happen has had a profoundly negative effect on Hinton's psychological well being. After a series of unsuccessful attempts to save those he touched from their own fates, Charles became fearful of touching others, especially those he loved, and turned to a life of homelessness to protect his family.

Retrieved from "https://marvelcomicsfanon.fandom.com/wiki/Charles_Hinton_(Earth-1010)?oldid=198526"
Community content is available under CC-BY-SA unless otherwise noted.