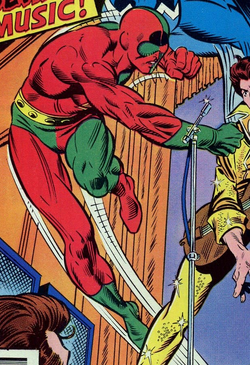 American
Occupation
Retired, formerly adventurer, pilot
Origin
Origin
After being abducted by Skrulls, Charlie Chandler escapes and is exposed to extradimensional energies, fusing him and his brother into the chronal force known as the Six-Dimensional Man!
Place of Birth
Los Angeles, California
Place of Death

You might have done good, brother, but I AM good.

Charles and Hal Chandler were twins who were incredibly competitive in childhood. Charles was interested in planes, while Hal was interested in science. Both became strong personas in their respective fields, as Charles became a successful pilot in the Air Force, and Hal became an inmate for committing various time-themed crimes, as nothing else could keep him intellectually satisfied. Charles was invited to pilot a NASA shuttle off-world, and he accepted, on the condition that his brother went with him. Agreeing, NASA sent the both of them into outer space. The mission was a failure, though, as both were abducted by the Skrull race.

The Skrulls interrogated them and subjected them to experimentation when they refused to tell them anything. This gave them their initial powers; the attributes 3x those of a peak human. However, when the Skrulls let their guard down, Charles and Hal tried to take control of the ship, and when the Skrulls caught them, a fight ensued. The ship couldn't handle being fired upon, and it exploded. They managed to return to Earth, however, they had been fused into one being. Given 6x the attributes of a normal man and minor control over time, Charles and Hal became the 6-D Man!

Being assumed dead by the government, 6-D Man had to maintain that assumption, creating the new identity of Hal Charles. More coming soon...

6-D Physiology: After being exposed to Skrull weaponry and energy, Charles and Hal both were granted 3x the physical attributes of an ordinary man. The accident that fused them gave them physical capabilities 6x that of a normal human, including his strength, speed, stamina, durability, reflexes, agility, balance, intelligence, and combat capacity.

Charles is an accomplished pilot and decent combatant due to his training with the United States Air Force.

Retrieved from "https://marvelcomicsfanon.fandom.com/wiki/Charles_Chandler_(Earth-166)?oldid=164248"
Community content is available under CC-BY-SA unless otherwise noted.