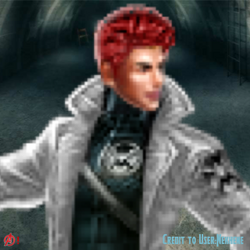 Cerulean Garrard was born to French parents Isabelle and Bastian under a full moon in Egypt during the festival of Bastet. Isabelle, expected to die during childbirth, delivered the baby in the middle of a procession honoring the Goddess Bastet. The child, born with glowing cerulean eyes and a flash of light was named Nekhene, the son and herald of the Cat goddess by the locals.

As he grew, Nekhene displayed varying degrees of arcane proficiency and an uncanny empathy for feline animals and fell under the radar of S.H.I.E.L.D.. After the Pulse destroyed his home and family, he was formally recruited into SHIELD, quickly establishing himself as one of the SHIELD's greatest assets. He now uses his barely controlled bursts of magic, his knowledge of the arcane and his cat-like speed and reflexes to help keep the world safe.

A student of anthropology and linguistics, in his civilian identity he likes to hang out with his boyfriend (Or their cats. Or his boyfriend's brother and His boyfriend), give his friends TV spoilers, read voraciously (from Swinburne to Vogue), write, sing professionally (jazz. On the side) and work on his PhD in Egyptian Ritual Theology.

After SHIELD was disbanded, he retreated to his homeland to continue working on his PhD.

He was approached by Director Coulson to join S.H.I.E.L.D. after it was rebuilt.

During the infiltration, Leo Fitz and Jemma Simmons had found out that HYDRA was partly embedded in the Advanced Threat Containment Unit on the behalf of Gideon Malick, revealing him to be a HYDRA head and Giyera to be an operative. Phil Coulson interrogated Rosalind Price and to her surprise found out the same information. When Garrard and other S.H.I.E.L.D. agents found out, they realized that the NASA operation Project Distant Star Return that Will Daniels had participated in was in reality under control of HYDRA as the logo bore similarity with the very first HYDRA emblem, much to everyone's surprise.

Grant Ward assassinated Rosalind Price while she was on a date with Phil Coulson. Nekhene was with Lance Hunter when Coulson entered the room. Garrard watched as Hunter tried to offer condolences to Coulson; however, Coulson grabbed him around the neck and pushed him against a wall, berating him for not killing Ward when he had the chance. Nekhene told Coulson he needed to calm down, and Coulson let Hunter go. Hunter apologized again for not killing Ward and begged for another chance. Coulson told him that he was recruiting him for another mission against Ward. Cerulean stepped in and told Coulson that he did not think putting Hunter on the assignment was a good idea; Coulson cut him off and told him he would be on the mission as well.

On the Quinjet, Nekhene learned that their mission was kidnapping Thomas Ward, Ward's younger brother. Once Coulson and Hunter had retrieved Thomas, Coulson called Ward and showed him a video feed of Hunter holding a gun to Thomas's head. When Coulson hung up the phone, Nekhene gave Thomas a drink. Thomas explained his life growing up while Garrard, Coulson, and Hunter listened. Ward called back, and while he spoke to Thomas, Nekhene tracked his location though the call. Once he had the location, Coulson had the call terminated. Dropping Thomas off, he asked if Hunter really would have shot him. Garrard just answered yes.

Nekhene flew the Quinjet to the HYDRA Castle. The team watched a thermal scan of beings in the castle, seeing that the portal was open and men were beginning to go through it. Coulson noted that one was Ward, and began putting on a parachute. Garrard quickly asked Hunter to talk Coulson out of his plan, but Hunter apologized for having the same plan. However, Coulson leaped from the Quinjet before Hunter, and Nekhene flew the Quinjet out of the reach of HYDRA.

Attack on the HYDRA Castle

No way they're taking us again.

As he and Lance Hunter landed on Zephyr One, Alphonso Mackenzie asked them why Phil Coulson had jumped from the Quinjet, so Hunter explained that Coulson felt that Grant Ward needed to be killed. Nekhene then said that Coulson went to save Jemma Simmons or Leo Fitz, who one of them was brought with HYDRA to the Maveth. Cerulean said that they needed to take control of the portal chamber to make sure they would return, but Mackenzie nor Hunter believed the mission would be easy. As Garrard tried to convince them, Quake then found out that HYDRA brought to the HYDRA Castle contained Inhumans. Mackenzie then explained his plan that two infiltration teams would enter the castle, one to find Fitz or Simmons and the second to take over the portal chamber.

Once the team infiltrated the castle through its aqueduct, Mackenzie took Nekhene and Hunter with him to take control on the portal chamber. As they were checking their and the HYDRA soldiers' heat signing, Mackenzie said that they needed to go to the chamber through the soldiers as quiet as they could, so Garrard went to fight with them, alone. Hunter and Mackenzie immediately fought with him. They eventually managed to take over the chamber.

As he tied up the soldiers, Simmons entered the room with the rest of the group. Johnson asked how secured were they in the chamber, so Cerulean replied not very good. Joey Gutierrez suggested that he could reinforce the doors with his powers, which Nekhene called them "amazing". Hunter and Gutierrez went to try that, and Cerulean led the way to Mackenzie. Once they regrouped, Simmons was afraid that Fitz could not find the portal, but Garrard insured her that he would, as Coulson was with him. Simmons explained that Ward was sent by Gideon Malick to find in the distance planet the ancient HYDRA leader there. Agent Nekhene then asked Simmons if she had seen the alien when she had been on Maveth and she responded positively. Lincoln Campbell suggested that they should destroy the portal to make sure the alien wouldn't come back, but Garrard said that they had to save Coulson and Fitz.

Suddenly they felt the room was shaken. Hunter and Gutierrez entered the room and handed everyone a gun. Mackenzie ordered them to return to Zephyr One, as he would stayed in the room. Hunter suggested that Nekhene and him would cover the entrances, but Mackenzie demanded they return to the plane, and if the alien or HYDRA would enter the room, they would blast the castle. They return to Zephyr One and waited for Mackenzie's orders. He then ordered Melinda May to blast the castle, as he returned in the Containment Module with Coulson, Johnson and Fitz.

Nekhene, Lance Hunter and Alphonso Mackenzie investigate a weaponry abduction incident in Bogotá, with an Inhuman involved. Mackenzie was later kidnapped by the Inhuman, so they cheeked the security cameras and noticed that the Inhuman had super-speed abilities. With Daisy Johnson, they beaked into the Inhuman's home and rescue Mackenzie. In Zephyr One they learned that the Inhuman was Elena Rodriguez. Garrard and Hunter went to cheek what she had done with the weapons. They found her cousin throwing the the weapons to the river. As they arrested him, Victor Ramon and Lucio from the National Police of Colombia came and refused to leave. Lucio revealed to be Inhuman, and paralyzed Nekhene and Hunter with his eyes and they took them to the station. The two woke up on the floor of the station, but Lucio entered the room and paralyzed Hunter again. Ramon questioned Cerulean about his doings in Bogotá, but he only responded that there was an alien invasion. As the team entered the station, Mackenzie came to the room and knocked Ramon out. Garrard warned him about Lucio. As the team walked with the captive Lucio, a HYDRA QuadCopter flew over them, caught him and escaped.

Retrieved from "https://marvelcomicsfanon.fandom.com/wiki/Cerulean_Garrard_(Earth-1010)?oldid=157893"
Community content is available under CC-BY-SA unless otherwise noted.