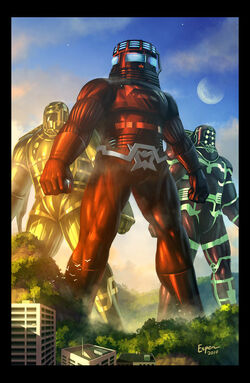 The Celestials have the same origins as their Earth-616 counterparts.

Vast Cosmic Power: The Celestials are a supremely powerful race of beings who are able to triumph against the Olympians and Asgardians with only a single Celestial. In fact, one Celestial is able to threaten entire pantheons of deities on multiple planets. They're immortal beings who are able to easily withstands blows from the likes of the Archangels from Heaven itself, and shrug off the blast of Excalibur, Durandal, Ascalon and even the Spear of Destiny itself. They do not age, nor wither overtime, they're able to manipulate energy ad matter at will, controlling it on a cosmic scale, they can create entire galaxies.

Transcendent Intelligence & Master Engineers: Celestials are the universe's most intelligent race, having intellect so incomprehensible, they're able to perform creativity and achieve technological advancement that allows full manipulation of reality, space, time, matter, energy and even black holes and white holes at will. Their tech is incomprehensible, making any form of replication of their tech impossible by any means.

Retrieved from "https://marvelcomicsfanon.fandom.com/wiki/Celestials_(Earth-888)?oldid=225000"
Community content is available under CC-BY-SA unless otherwise noted.