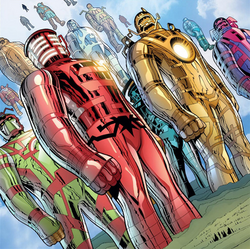 In the beginning, the Abstract Entities existed. To hasten life's development, Eternity and Master Order crafted the Celestials.

They were also given the task of judging whether or not a world required extensive intervention to properly continue, or to exterminate a world which was beyond saving.

Around three thousand years before the present day, the Celestials fought against the Gods of Earth. For the first time in history, it took all forty of the Celestials to defeat a planet's Pantheons and only after a hard fought victory.

They decreed to the gods that they would not interfere again with Earth's development for three thousand years, lest they risk the wrath of the Celestials.

Class 100+: The Celestials are easily capable of outmatching even Gods of Strength individually, granting them Solar-Scale strength. With a thumb, a Celestial effortlessly pushed back a combined wave of energy from Earth's heroes that had been augmented by a satellite weapon and had the power to vaporize continents.

Retrieved from "https://marvelcomicsfanon.fandom.com/wiki/Celestials_(Earth-42180)?oldid=219906"
Community content is available under CC-BY-SA unless otherwise noted.