Marvel Fanon
Register
Don't have an account?
Sign In
Advertisement
in: Characters, Templated Articles, No Dual Identity,
and 12 more 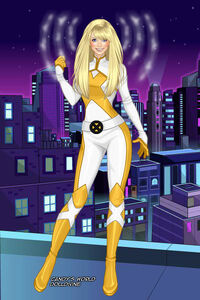 While Emma Frost was laying in a comatose state, Dr. John Sublime harvested eggs from her to begin experimentation. The Weapon Plus program began the cloning to develop a powerful weapon capable of killing every mutant on Earth by combining their telepathic abilities. The project was designated Weapon XIV, and girls were incubated and artificially aged inside the subterranean level of The World. Thousands of girls were cloned from the ovum, but while the others remained dormant, five girls were sent to infiltrate the Xavier Institute as students and sisters, in order to hone their talents for Sublime's purposed.

After the Xavier Institute went public,Celeste and her sisters were enrolled as orphan quintuplet sisters.To protect their secret origins, the girls unconsciously place mental blocks in the minds of the faculty preventing them from investigating their background.

The Three in One Sisters became the Six in One with Alexandra, Kimberly and Lauren joining them in the X-Men.

Celeste's powers are identical to that of her sisters.

Those of her her sisters.