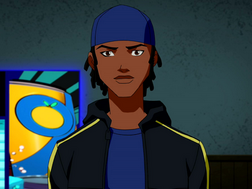 Cassidy Caruso also known as Arrow is a Human Mutant who is now a member of Xavier's School For Gifted Youngsters. He used to be a test subject for Shaw Corp and even became a short term body guard for J Jonah Jameson. He has the unusual power of Vector Manipulation.

Cassidy Caruso was born in Manhattan, New York to laboratory scientist Martin Caruso and accountant Eve Caruso. As he grew up his parents didn't really have much time for him meaning that he could only confide in his friends.

One day while Cassidy was out in Times Square on his way home when a fight between Spider-Man and Electro ensued in the area. Along with large group of people Cassidy fled the scene and tried to escape. Electro fired a bolt at Spider-Man, which he dodged, and it hit a nearby car causing it to explode into the air. As the car hurtled towards the crowd. Cassidy's eyes began to glow cyan and he put his hands up, this caused the car to unusually stop in midair and quickly fly back upwards on top of a building. Puzzled at what happened, Cassidy continued running until he reached his home.

The next day, while at school, Cassidy was playing a game of baseball and it was the 9th inning. All his team needed was a homerun to win the match and Cassidy was the last batter. On the second throw Cassidy felt a high surge of excitement and he swung the bat. Though the bat didn't even connect with the ball, the ball went flying over the school and it landed on the roof much to the mixed excitement and annoyance of the crowd. Cassidy started to become suspicious of his body and even tried to use his powers to lift a pen, in which it worked. Excited about his powers Cassidy went out on a spree with his powers, pulling random pranks on people to actually helping the odd few until he got bored. Unknown to him, however, he was being watched by a gang who had noticed his powers and liked what they saw.

One night on his way home he was kidnapped by the gang and was asked for his assistance in robbing his own father's Lab to which Cassidy agrees with some reluctance. On the day of the heist the group gets caught by them and the CEO, Bradley Shaw, offers them a choice. Either face full prosecution which could result in a 10 year sentence, or they keep it to themselves and become experiments for Shaw Corp. Everyone chooses the second option and agrees to become his test subjects.

Cassidy and the group is forced to agree to a number of terms with this new agreement. He must come to the Lab at 10 o'clock every night for experiments and training on focusing his powers, he must not tell anyone about the experiments nor discuss it with the group outside the lab and if he disobeys any of the rules they will charge him. Cassidy is subjected to a number of tests by Shaw Corp on his powers to find out what they actually are so that they can be replicated. Originally Cassidy thought that it was telekinesis, but after sometime they realized it was actually Vector Manipulation since Cassidy couldn't use his powers on anything unless they were already moving. After a bit of training Cassidy was hired as a secret weapon (under the codename 'Arrow') to be a bodyguard for J Jonah Jameson as he was a witness to a court case that would put famous gangster Romano Forte in jail. The car, which he was being transported in, was attacked and Cassidy managed to dispatch of most of the thugs and helped the reporter escape from their ambush.

Vector Manipulation: Cassidy has the unique ability to be able to change the direction and magnitude of any matter and energy. He can use this as from of telekinesis, however, it only works on moving objects. He can use this to attack other by redirecting strong wind blasts and throwing objects or he can use it as a form of solid defense in order to block attacks and even deflect them.

Velocity Control: Cassidy is able to change the speed of already moving objects and people by affecting the Vectors around them. He could alter how gravity affects them to stop them dead in their tracks or speed himself up by affecting his own Vectors using Acceleration.

Retrieved from "https://marvelcomicsfanon.fandom.com/wiki/Cassidy_Caruso_(Earth-1610)?oldid=256360"
Community content is available under CC-BY-SA unless otherwise noted.