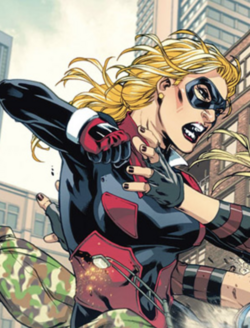 When Cassie Lang was only six-years-old, her father, Scott, was arrested for bugling VistaCorp. While her mother and everyone else in her life grew to hate Scott, Cassie never gave up on him. Even after her mother married Jim Paxton, the officer who arrested him.

When Scott got out of prison, he and Cassie broke the rules and saw each other every opportunity they got. They became even closer, so much so that Cassie was able to deduce on her own that he was the new Ant-Man. He initially tried to deny it, but she gave him her blessing, and even came to love her new step-mother, the Wasp.

Eventually, Cassie became overwhelmingly inspired by her father and step-mother, and went so far as to steal Pym Particles directly from Hank Pym. However, her direct exposure to them imbued her with the ability to change her size at will.

She tried to use her newfound powers to fight crime, which attracted the attention of Riri Williams and Kate Bishop. She was more than happy to join their team of Young Avengers and do good on a larger scale. However, it did not take long for her father to discover what she had done. He was not happy, but after seeing her in action, her gave her his blessing, just as she had once done for him.

Retrieved from "https://marvelcomicsfanon.fandom.com/wiki/Cassandra_Lang_(Earth-101)?oldid=250019"
Community content is available under CC-BY-SA unless otherwise noted.