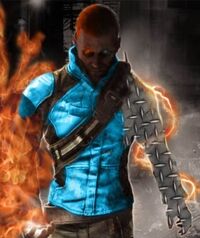 Bald, Was Half hair colour Red and Silver
Unusual Features
Half Red (Left) and Half Sliver (Right)
Status
Citizenship

"Your sister, eh? She's important to you as a family? Same here about my sister and me! You work hard to take care of her and make her happy like I am.

Casey Livingston is the brother of Anna Livingston. He's a teenager with mixed powers of Fire and Metal and joined the X-Men and the Avengers team with his sister. His father and mother are mutants and they are unknown (for now).

When he was a little boy with his sister they lived and adopted in South Africa with Ororo Munroe (Storm) and his friends. After growing up she's been taken to Charles Xavier's school of mutants along with his sister, he works hard protecting his sister whenever she gets picked on or hurt and meeting new friends who are mutants and takes long of getting used to. But he had fun using powers as games because other Mutants at school did the same thing.

When in the battle with the Sentinels he sees his sister in trouble but she used her lightning powers killing one of the Sentinels and being saved by Storm and the X-Men. He noticed thanks to her powers she can take care of herself and being taught and learned how to control and use her powers. But still work hard to protect her whenever there’s trouble, he can be overprotective sometimes.

He also leaves the X-Men and joined a new group called "New Mutants" to look after his sister.

Casey is a mixed mutant. He had both Fire and Metal elements.

He can use one element at a time and mixed both whenever the battle is intense. The appearance of a mixed element is metal look with fire around his body and use fire attacks and Metal punches.

The mutant sibling relationship dynamic is inspired by Quicksilver and the Scarlet Witch.

Retrieved from "https://marvelcomicsfanon.fandom.com/wiki/Casey_Livingston_(Earth-616)?oldid=188573"
Community content is available under CC-BY-SA unless otherwise noted.