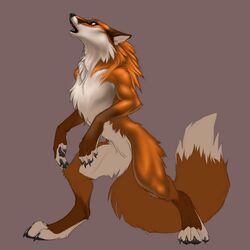 Casimir Alexander King, known as Casey King, was born in Kansas City, Missouri. When he was 19, he was bitten by a genetically engineered fox that had escaped from a science lab. This bite, similar to Spider Man, gave him his powers.

Casey went to the hospital, believing the fox was rabid. He tested negative and went home. When he woke up the next morning, he found himself transformed into a humanoid fox. He passed out, and when he awoke, he found himself in his normal, human state. Believing it was all a dream, he dismissed the possibility of it being real.

The next few days, he noticed his senses had become more acute, especially his sense of smell. He had also gotten more agile and his reflexes had improved. After a week, he wondered if the transformation wasn't a dream. He decided to try to morph back into his other state. After a few seconds of thinking, he transformed into the humanoid fox state again. Realizing he could now control this change, he dubbed himself "Foxtail" and started to fight crime.

Retrieved from "https://marvelcomicsfanon.fandom.com/wiki/Casey_King_(Earth-616)?oldid=259069"
Community content is available under CC-BY-SA unless otherwise noted.