Caroline Paige Danvers, commonly referred to as Carol Danvers, is a female Marvel superhero that appears on DuttPanda`s Apocalypse Universe and is the wife of Peter Parker. 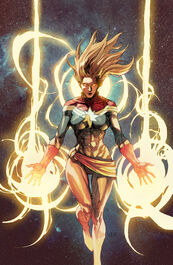 The Suit After Timeskip 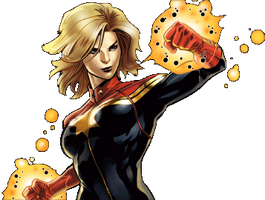 The Suit Before Timeskip
Add a photo to this gallery

Carol sided with Iron Man during the Civil War but after Peter ended the Civil War, she had to retreat to Chicago and remain low for a few months fearing that something disastrous will occur once again. A few days later, she wakes up in space and is astounded by what she is just witnessing. Then she realizes that she is chained by the Kree Planet as an experiment. Angered, she uses all of her strength to evade the Kree Planet and is now on hunt by Paibok and Super Skrull and Crusher Skrull, a Skrull Giant who is as large as Galactus (but not as strong as he is).

Spider-Man, Wolverine and Thor journey across space searching for Carol and they finally stumble upon her. Realizing that she is the subject of a manhunt and has a bounty of two billion Nutellas (space money), and everyone, including the Guardians of the Galaxy are searching for her, the three Watchdogs helps Carol come across obstacles and numerous occasions and all of the four heroes return to Earth. Later on, she joins the Watchdogs.

Kamala Khan, the superheroine known as Miss Marvel of the Young Avengers, tells Wiccan and Hulking that her only wish as Miss Marvel was to have Peter Parker and Carol Danvers date (she ships them, even in the canon version). Kamala has a weird dream where a bug is simultaneously attacking her and telling her that her last dream as Miss Marvel will come true.

In fact, Carol and Peter secretly liked each other and couldn't confess their feelings to one another.

In the final mission of the Watchdogs, when Steven Rogers turns out to be the Evil One (who secretly led the Apocalypse Casino Villains Squadron) and used all of his stolen weapons like Mjolnir (he forced an alternate universe Nick Fury to say a type of Illuminati magic to make him worthy), The Orb of Agamotto, The Jewel Of Ocarus and other cosmic items to attempt an extermination on the Watchdogs, Carol and Peter share a passionate kiss when they thought that this is the end but after a minute when they realize how to defeat Rogers and after they do, Carol and Peter start dating. After eight months, Peter marries Carol in the Excelsior Building created by Marshall D. Gray and in the wedding day, every single superhero from every single Marvel Multiverse attends the wedding. Later onwards, Carol becomes the chairman of the New York Times whilst maintaining a position as a superhero.

Superhuman Strength: Carol is super humanly strong and is listed at a normal level somewhere between class 50 and class 90, likely class 75. However, since she is able to absorb various types of energy, she can use this energy to temporarily increase her physical strength to levels similar to that of her time as Binary, in which form she reaches class 100+.

Superhuman Durability: The tissues of her body are considerably harder and more resistant to physical injury than those of an ordinary human. Carol is capable of withstanding high caliber bullets, great impact forces, falls from great heights, exposure to temperature and pressure extremes, and powerful energy blasts without sustaining any injury. While channelling the energy she has absorbed, her body's resilience is extended to an even greater degree. Recently, she has proved capable of surviving and fighting in the vacuum of space, only requiring an air supply to do so.

Superhuman Agility: Carol's agility, balance, and bodily coordination are enhanced to levels that are beyond the natural physical limits of even the finest human athlete.

Flight: Carol is capable of propelling herself through the air and the vacuum of space at tremendous speeds. Although her top speed is unknown, she has been shown flying at three times speed of sound for several hours, so it is likely she can go much faster.

Flash Precognition: Part of her original power set as Ms. Marvel, Carol was subconsciously able to anticipate the moves of her opponents, though this power was not exactly reliable and activated randomly. After Rogue robbed her of her powers, she was subsequently transformed into Binary. After these powers faded, it seems that Carol's Seventh Sense has returned.

Contaminant Immunity: Carol possesses an amalgamated human/alien Kree physiology that granted her a degree of immunity to toxins and poisons.

Photonic Blasts: Carol can fire powerful concussion blasts of photon and stellar light energy from her hands and fingertips.

Energy Absorption: Her body is capable of absorbing various types of energy for the purpose of temporarily enhancing her own physical attributes. She can augment her strength and energy projection up to the force of an exploding nuclear weapon. If empowered by enough energy, she can assume her Binary form again temporarily.

Multilingual: Carol is fluent in English, Russian, and another unrevealed Earth language, as well as Kree, and Shi'ar languages. She speaks passable Rajaki and has a limited vocabulary in many other languages.

Expert Pilot: Carol is an accomplished pilot, having extensive experience with USAF planes as well as with Kree, Shi'ar and other alien starships.

Expert Combatant: She is extensively trained in armed and unarmed combat through Military Combatives.

Talented Journalist: Carol is a talented journalist excelling as a freelance writer and magazine editor. She recently is the chairman of the magazine, The New York Times.


Cite error: <ref> tags exist, but no <references/> tag was found
Retrieved from "https://marvelcomicsfanon.fandom.com/wiki/Caroline_Danvers_(Apocalypse_Universe)?oldid=234958"
Community content is available under CC-BY-SA unless otherwise noted.