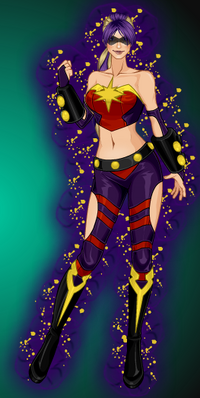 Blonde, with natural purple streaks
Unusual Features
Like her father can take on a full ionic form that is red violet in color
Status
Citizenship

I just can't keep pretending there's not something more out there, that there isn't more I can't accomplish. I just can't stay in Beverly Hills, knowing there's others who need my help. I want to be part of something bigger!

At some point in the later part of their careers, the budding romance of Wonder Man and Ms.Marvel resulted in an unexpected pregnancy. Due to her earlier experiences with Marcus Immortus in her earlier times with the Avengers, Carol initially became spooked and worried such an event was happening again. Her paranoia nearly caused a break up between Simon and Carol before he finally convinced her to approach their teammates about the situation. Still holding deep suspicion, Carol was checked by Reed Richards, Henry Pym, and Tony Stark on the results of her developing child, all of which ran several tests to be absolutely certain of the results. She was found to be carrying a regular child and after several reassurances her paranoia passed.

The one thing that couldn't be confirmed though was Carolina's potential of being a mutate. Once she was born, Carolina seemed normal, being happy and healthy much to her parents' relief. Unfortunately, their life was anything but normal as her father had taken up an acting and stuntman career while Carol decided to retire from heroics to focus on family life. But the family was viewed as a "celebrity" family due to their past deeds as heroes, which put Carolina in the spotlight early in life and well into her later years. Nevertheless, her mother did her best to keep it normal as can be, even having her daughter enrolled in private school while her and Simon taught her basic hand-to-hand as she grew.

Due to also visiting many sets her father was a part of, Carolina early on grew a love for acting and sometimes would practice with her father. But during one of these visits, an eleven year old Carolina attempted to repeat a deadly stunt of jumping from a roof top of an action scene her father was practicing, causing dread for her parents when she attempted to repeat it. Rushing to her aid the two went to catch her only for Carolina to subconsciously slip into her ionic form for the first time out of fear and excitement, avoiding her of having serious injury and startling her parents and others witnessing the incident. For the first time, the confirmation of being an enhanced human was confirmed and prompted her parents to extend any training they were giving her to properly use those powers.

Once thirteen rolled around, Carolina began to hit that rebellious stage in life where she wanted more freedom and sought to become a hero like her parents. Creating a makeshift costume for herself, Carolina snuck out of their home often to fight street crime in the night, making use of her ionic abilities and newly discovered Light Manipulation to her advantage. But her secret didn't remain as her parents discovered her activities quickly from reports and sightings shown on the news and by fifteen Carolina revealed herself publically much to the chagrin of her parents who initially grounded her and forbade her from continuing her vigilante ways, largely due to the fact she didn't come to them about it in the first place.

Being grounded didn't last long for the young heroine though, as Simon and Carol were approached by Sam Wilson Senior about the new Avengers Academy. Though they almost considered not allowing her to go due to her recent activities Simon once again was the one to convince Carol otherwise. Seeming as their daughter desired to be a hero, he figured she might as well get the proper training and discipline to be one. Convinced but still reluctant Carol allowed their daughter to be enrolled into the academy where Carolina eagerly moved to, for the first time meeting fellow young heroes who shared much of eagerness to make a name for themselves.

In her normal form she has the average strength for a girl her age and height. In her ionic form Carolina can easily lift 10 tons and her strength can vary with her size alteration.

Retrieved from "https://marvelcomicsfanon.fandom.com/wiki/Carolina_Williams-Danvers_(Earth-7194)?oldid=221957"
Community content is available under CC-BY-SA unless otherwise noted.