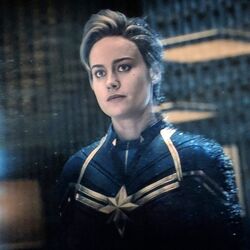 I'm going stir crazy stuck in this station all the time. I wish there was something... literally anything I could do to help down there. I feel worthless up here.

Carol Danvers became Captain Marvel after having her DNA spliced with that of a Kree soldier, making her one of the most powerful heroes on Earth. She worked alongside S.H.I.E.L.D., and later the Avengers, to battle against the forces of Apocalypse.

Captain Marvel went off world briefly to locate the Ultimate Nullifier as a last ditch effort to defeat Apocalypse, unaware that in her absence, Ultron rose to power and surrounded the entire planet Earth in an impenetrable force field, trapping Carol on the outside. She set up shop in the Alpha Flight Space Station in order to make contact with the Avengers and help them in whatever way she can, but all efforts to bring down the force field have failed.

Carol had since joined forces with the Guardians of the Galaxy in order to give her a sense of purpose, rather than just staying in the Space Station all the time going crazy trying to think of a way through the force field.