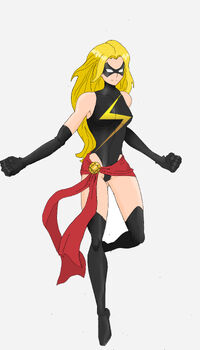 Carol Danvers is the daughter of Joe Danvers, Sr., a former U.S. Navy officer and construction worker, as well as Mari-Ell, a champion of the Kree. Mari-Ell was then sent on a mission to the planet Earth and given an Amulet of Pam'a to hide her identity. Arriving on Earth she was blown off target and landed in Wichita, Kansas and was rescued by Joe. The two married and she later became pregnant and gave birth to a daughter, Car-Ell; "Champion" in Kree language, which they changed to "Carol" to fit in on Earth.

She was born and raised in Wichita, Kansas. She dreamed of becoming an astronaut and traveling to distant planets. She turned 18 just a few months later and joined the Air Force, intending to be a pilot and to get a college degree via the military. She quickly rose to the top of her Air Force class, taking the call sign "Warbird".

NASA eventually requested her for an open position as head of security which she accepted, resigning from the Air Force bumping her to full Colonel at retirement. Making the youngest security captain in NASA's history. Afterwards, she worked alongside Dr. Philip Lawson in a special satellite base in Colorado. After an attack by an alien Sentry, Lawson revealed himself to be a Kree warrior/scientist known as Captain Marvel. During the battle, an explosion caught both Marvel and Danvers in the middle, causing Danvers to be exposed to the cosmic energy flowing around Mar-Vell. Carol was transferred to a hospital for recovery, where she discovered she had gained powers from her exposure. Carol and S.H.I.E.L.D. later confronted and questioned Captain Marvel on his motives behind allowing the Kree to invade Earth, and Mar-Vell told them that he wanted to help, that humans had so much potential. He stated that he believed that Carol deserved to live, before being corrected by Nick Fury that he meant the human race. S.H.I.E.L.D. and the government dedicated a quiet study on Carol and suggested that it was best for her to hide her powers from the public.

Mar-Vell then trained Carol how to use her newfound powers in case the Kree decided to invade Earth, she would be ready. As they sparred, Mar-Vell asked Danvers about her dreams, to which she replied that she wanted to go to space and explore other worlds when she was a child and that hasn't changed since. One day, after Carol saw on the news that Flight 616 was going to crash, Carol used her full abilities to help the plane land, saving dozens of people on the plane. Deciding to become a hero, Carol confided her secret to her best friend Monica Rambeau. With Monica's help, a costume was made, and Carol was able to stop many crimes in the city of Colorado, including a bank robbery and car chase. However, she was berated by Mar-Vell and Nick Fury, who expressed their displeasure with Carol that she had revealed herself to the world and potentially grabbed the attention of the Kree. Wanting to learn more about her powers, Carol travelled back to her hometown in Kansas and visited her parents, her mother welcomes her back with a hug. When Carol asked of wherabouts of her father, Marie hesitated and tells her that her father was killed in a drunk-driving accident after hearing about what happened to her older brother Stevie; while he was in the military, he was killed during a mission in Afghanistan.This new bought devastation torwards Carol and the mother and daughter both embraced each other.

Her mother then explained the origin of her newfound powers by revealing to her that the she was Kree, and the explosion that she was caught in might've activated her powers. Later, a Kree warrior was sent to earth to capture Marie and Carol and attacked the Danvers' home. Marie was was impaled by a spear thrown from a Kree assassin known as Tanalth the Pursuer when she was trying to protect her, Carol took her mother's body into space, away from Tanalth, where Marie died from her fatal injury in Carol's arms.

Later in her apartment, Monica was seen comforting Carol as she mourned her mother's death. She blamed herself for all of it and if she hadn't tried to play hero, and been careless with her powers, she could've still been alive, now she has no one left in her family. Afterwards she was surprised to see Monica walk away with a blank stare, and joined hundreds of other people marching blankly down the street, all under the control of the Kree's super weapon called "Myraid". Carol as Ms. Marvel flies around the city of Denver as she notices Kree ships hovering above the city and are taking the mind controlled humans captive, including Monica. She notices everyone, are now under the Myriad effect. Carol tries to get in contact with S.H.I.E.L.D. and Captain Mar-Vell for help but they're both aren't responding. She then sees one of the Kree ships land on the ground and sees Mar-Vell walking out of the ship with his commander Yon-Rogg, and other Kree troops. The enraged Carol questioned Captain Mar-vell's motives behind allowing the Kree to invade her planet, as she had thought all the time he was in space he was fighting for the rights of the planet. It was only then she realizes that Mar-Vell was under the Myriad effect as well! Yon-Rogg then explained to Carol that they're invading Earth to test humanity that if they're worthy to join the Kree empire, if not humanity will be destroyed. After Carol refuses Yon-Rogg's offer to join their Empire, Yon-Rogg ordered Mar-Vell to kill Carol. Carol and Mar-Vell battled as she kept trying to find a way to reach him. Their fighting spilled into the streets of Denver. Carol was almost killed by Mar-Vell but just in a nick of time, Fury and Hill arrived and used a device of flashing multicolored lights to stop Mar-Vell, freeing him of his mind control.

Showdown with the Kree

When Ronan the Accuser arrived, Danvers sprung to action and flew into the air to stop an incoming barrage of ballistic missiles while Mar-Vell was recuperating. Danvers then launched herself at one and halted it in midair before throwing back into the barrage, causing them to harmlessly detonate in midair. Danvers and Mar-Vell then flew into space to dispatch Ronan's fleet, utilizing they're empowered photon blasts to destroy his ships with one strike. The pair then led an assault on Yon-Rogg's capital ship stationed in Earth orbit, destroying it and rescuing the humans taken aboard by it while S.H.I.E.L.D. on the other hand worked on a counter signal to Myriad. Ms. Marvel and Captain Mar-Vell both engaged Yon-Rogg and Tanalth the Pursuer in battle. They both proved to be very formidable opponents but both the heroes were able to outmatch them fortunately and Carol went to a brodcasting station and successfully broke Myriad's control over the people of Denver, by giving a speech about hope. Seeing this impressive feat of power, Ronan and his fleet fled, but not before remarking that he would be back for Danvers, referring to her as a "weapon." After the battle, both Yon-Rogg and Tanalth were imprisoned in Area 42 by S.H.I.E.L.D. Danvers was later tasked as second-in-command to the S.H.I.E.L.D.'s Extra-Terrestrial Division known as S.W.O.R.D. Mar-vell revealed that while he was under Myriad's mind control, he convinced the Supreme Intelligence that Earth is a scientific and technological anomaly and must be studied but now Earth is a threat to the Kree and his people will come back with full force, which Ms. Marvel replied "We'll be waiting then."

Carol Danvers is kind, caring, selfless, intelligent, brave, and has a sense of justice, honor and good morals, however, when she makes mistakes, she feels guilt and remorse for her actions. Before becoming a superhero, Carol was dedicated in her work and achievements, She believed in keeping a professional level in dealing with other coworkers. Even without powers, she was shown to be brave and bold. After losing her mother, Carol was troubled but she was still optimistic and good-natured. After joining The Avengers she has become the kind of hero who will beat criminals up but also try to help them. She was shown to have a dry wit and that she has a short temper. She also seems to be quick to judge others if deemed necessary.

Flight: Carol is capable of propelling herself through the air and the vacuum of space at tremendous speeds. Although her top speed is unknown, she flew at three times the speed of sound for several hours, so it is likely she can go much faster.

She is able to lift/press 50 tons.

Retrieved from "https://marvelcomicsfanon.fandom.com/wiki/Carol_Danvers_(Earth-981)?oldid=267996"
Community content is available under CC-BY-SA unless otherwise noted.