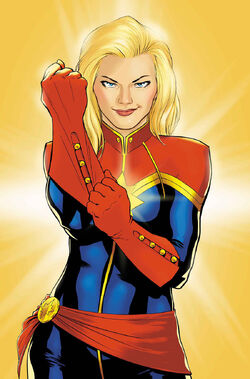 Why does everyone always resort to dares with me?

Carol Susan Jane Danvers grew up as the oldest child of three in a traditional Boston home, with a contractor father who believed in the merits of hard work. When he built their Cape Cod summer home, Carol insisted on working as hard as her two younger brothers, trying to make equal in her father's eyes.

A voracious reader, she dreamed of becoming an astronaut and traveling to distant planets; as a teen she even hitchhiked to Cape Canaveral to view a launch there. Her father however, could not accept women as men's equals, and when financial troubles meant he could only send one child to college, he chose middle child Steve despite Carol's superior grades.

She turned 18 just a few months later, and the following day she turned her back on her father and joined the Air Force, intending to be a pilot and to get a college degree via the military. Eventually, she quickly rose to the top of her Air Force class and was recruited into military intelligence (Special Operations) and trained as a spy.

She accomplished many different missions and worked with other figures such as Colonel Nick Fury, and Ben Grimm (later the Thing), while opposing others such as Natalia Romanova (later the Black Widow).

N.A.S.A. eventually requested her for an open position as head of security which she accepted, resigning from the Air Force bumping her to full Colonel at retirement. Becoming the youngest security captain in N.A.S.A.'s history, she became embroiled in the schemes of the interstellar alien Kree Empire after discovering its secret history and real existence.

It was during this time that she secretly met, helped, and eventually befriended the Kree soldier Mar-Vell, who was under the guise of the recently-deceased scientist Walter Philip Lawson, whose foes would soon be responsible for her future transformation. The next few months were disastrous as she was kidnapped by the cybernetic alien known as Cyberex, but was later rescued by Mar-Vell after destroying Cyberex. She was led be in a coma for a few days, before finally recovering and continue her duties.

The tyrannical alien Yon-Rogg, then kidnapped her while she was still concussed and eventually battled Mar-Vell. During this battle, Carol was knocked into a damaged Kree Psyche-Magnitron, a powerful device which could turn imagination into reality. Carol's genetic structure was altered effectively making her a half-Kree superhuman. Carol's wish to stand with Mar-Vell as an equal rather than a helpless victim completed the process, and her DNA became a perfect synthesis of Kree and human genes. She was unaware of this change for weeks until she discovered her unusual abilities.

Her successful career at N.A.S.A. was severely damaged because of these recent events. Due to her continued inability to control superhuman incursions, she was removed and reassigned to a minor N.A.S.A. facility near Chicago. Later on, she would eventually discover her newly-developed powers as the result of the explosion that unknowingly changed her, weeks ago.

Finding her powers in the hardest way, she became intriguingly furious at N.A.S.A. for the precious incidents that have occurred, and started having the thoughts of trying to tell-all expose on N.A.S.A.'s deepest, darkest secrets as she tries to resign the controversial organization. Nothing could have ever stepped into her way, that is, until Dr. Lawson decided to stop her immediately from posting the series to articles that she wrote on her private blog, articles that would expose N.A.S.A.

Dr. Lawson then convinced Carol that keeping all those incidents away from the public would be the best choice to keep them safe from the dangerous truth. Despite what Walter did to Carol, he also told her that they're on the same side, since he didn't trust N.A.S.A. as well as much as she did. Walter the told Carol that the main reason for convincing her to not exposing N.A.S.A. was an act to protect his secret identity, causing for Walter to reveal himself to Carol as the Kree known as Mar-Vell.

Carol was shocked and was surprise by this revelation, however, Mar-Vell calmed her down, to which he told her all about where he came from, and honestly told her that he's on her side, on the humanity's side. Afterwards, he told Carol that he has accidentally crashed into Earth and has been trying to figure out a way home ever since, and as long as he was on Earth, he vowed to protect it from the offenses of his own tyrannical race. Carol intimately trusted Mar-Vell, marking another large step into their friendship, and promised him to never exposed the true identity of her close friend.

In the wake of finding out her uncontrollable powers and abilities, Carol began training herself into using these powers with the help of Dr. Lawson, whom she treated as a really great friend and mentor, seeing his sincerity into helping her improve her secret training. Much later, she finally became the famous heroine known as Ms. Marvel, and soon established herself as a powerful superhero in her own right.

After working several cases with the Avengers during their hunt against several Kree resistance fighters which were led by Yon-Rogg, Ms. Marvel herself finally accepted the heroes' invitation and volunteered to join the the Earth's Mightiest Heroes after the traumatic events of Ultron) Offensive. Despite Mar-Vell's little of concerns, he let her joined the courageous alliance, after realizing and seeing that she's already done with her long training, and is finally ready to be herself as the marvelous and wonderful hero, Ms. Marvel.

Eventually days after Carol became the new member of the Earth's mightiest heroes, with her first mission as an Avenger was defeating helping the team what's left of several Hydra bases across the world, her fellow ally, good friend, and leader Tony Stark, helped Mar-Vell in fixing his wrecked spacecraft, and afterwards, Mar-Vell was able to say his warm farewell to Danvers and a few of the Earth's heroes, before successfully launching into space and leaving Earth for the very first time, at least for now.

Only weeks prior to the events of the Nimrod Invasion, and few months prior to Ultimate War, Danvers decided to leave the Avengers for a while, due to reasons still remaining unrevealed, though it was hinted that it has something to do with her not having full control. During her leave of absence as a hero, she decided to hitchhike back to Cape Canaveral, the very place where she first began to started dreaming about her future. There, she began contemplating her own being, along with a regretful phase where she questioned her existence and true purpose in this life. During her brief introspection and existential crisis, her moment was abruptly ended, when she suddenly saw another spacecraft, crashing as it lands far into the distance.

Carol immediately approaches the scene to investigate the unfortunate occurrence, but she was too surprised to see that the pilot was in fact her long-time ally Mar-Vell, whom she reminisced with once again. As she helps Mar-Vell leave the unsalvageably damaged craft, she looked upon him, only to notice that he was extremely somber and traumatized, as if he barely escaped a war or a battle so chaotic, and so destructive, that he could have never handled it on his own. Mar-Vell then warned Danvers that he came back to her, all because "they" would be desperately needing her help. Answering Danvers' question on why he would be needing her help, he briefly responded, telling her that her ultimate godly powers would be the final key into ending the galactic war that he and the rest of his allies and teammates had always been fighting for hundreds of years even before he existed, once and for all.

With the help of Captain Marvel's psychological method in order to make Carol tap into unlocking some more of her powers' capabilities, Carol discovers and unleashes her newfound cosmic abilities, most importantly her new powers of cosmically flying through the vacuums of space as Mar-Vell helps her get into the planet's orbit, that she would also be coming with him to the planet Skrullos, the last known warzone between the Krees and the Skrulls, as well as the latter's homeland. Now fully unleashed, Carol suits up in her new special uniform and finally flew off the Earth's surface, leaving the planet as she travels with Mar-Vell at the speed of light to the violent planet of Skrullos, since she was destined and obligated to help a friend in need, along with a galaxy hopelessly in need of salvation from the deadly hands of the Kree, Mar-Vell's ruthless race capable of destroying a fleet effortlessly, and the Skrulls, a bloodthirsty race of shape-shifting conquerors.

Upon their arrival at the planet, the two safely crashed in the barren parts of Skrullos' desert, an area far away from the city of the Skrulls, where the ongoing war between the two empires was still occurring. Witnessing another massive explosion at the city, Mar-Vell and Danvers swiftly flied towards the havoc being wreaked across the entire battlefield. As they promptly fly towards the warzone, Danvers sees the Accuser Huran trying to trigger another quantum explosive device, but in this case, hurling it directly towards the Guardians of the Galaxy, closest to an unconscious Gamora, in the arms of Star-Lord. Thanks to Danvers' ultrasonic speed, she was able to catch the explosive in time, where she embraces it with her own body, surprising the rest of her allies. Due to Danvers' action, the explosion of the quantum explosive was fully minimized. Suddenly, Carol emerged from the explosion's crater, unknowingly aware that she had discovered her new cosmic power to regenerate at an accelerating rate through absorbing the explosive's energy.

As it follows, Ms. Marvel finally joined the heroes' cause in winning this final battle, battling both the forces of the Skrulls and the Kree, in order to truly end the Kree-Skrull War once and for all. During the battle of Skrullos, Danvers easily overpowered and effortlessly obliterated both hostile forces, along with Mar-Vell defeating his former superior-turned-rival, Yon-Rogg and the rest of the Kree forces, and the Guardians and the Nova Corps apprehending most of the surviving Skrull fleet. As several hours went by, it was announced and declared by the Nova Corps to the entire galactic community that the war that lasted for hundreds of thousands of years has finally ended with a peace treaty between the two races.

Unluckily, however, the heroes themselves found out that the heads of the Skrull Empire secretly commanded the disguised Skrulls hiding on the planet Earth to begin the "next stage," to their mysterious plan known as the "Earth Protocol," to which they would later explain that despite their conflict with the Kree had already ended, their conflict on conquering Earth has only just begun, and decided to infiltrate and finally invade it after so long. The Guardians of the Galaxy, along with Ms. Marvel and Mar-Vell onboard their ship, immediately travel to Earth after the end of the Kree-Skrull War, warning the heroes of Earth of the threat that's about to occur on the planet, which were the Skrulls themselves who were all currently hiding on the planet at the moment, and were willing to help them fight them and prevent them from ever invading Earth.

Retrieved from "https://marvelcomicsfanon.fandom.com/wiki/Carol_Danvers_(Earth-61615)?oldid=210380"
Community content is available under CC-BY-SA unless otherwise noted.