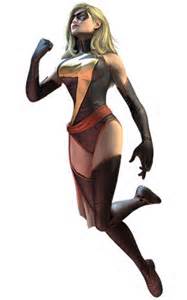 Little is known about Ms. Marvel's life before the Masters of Evil's attack on the S.H.I.E.L.D. USS Alpha Helicarrier. It can be assumed to be similar to her mainstream counterpart.

Ms. Marvel was a member of the Ultimate Alliance. He aided the team against Dr. Doom and the Masters of Evil.

While investigating weapons shipments underneath New York, Ms. Marvel gets captured by Shocker & Latverian soldiers under the command of the now-cyborg Lucia von Bardas. She was freed by the Alliance, and helps them to the weapons cache. During the Superhuman Civil War, Ms, Marvel joined Iron Man's Pro-Regsitration forces.

Retrieved from "https://marvelcomicsfanon.fandom.com/wiki/Carol_Danvers_(Earth-6109.2)?oldid=195262"
Community content is available under CC-BY-SA unless otherwise noted.