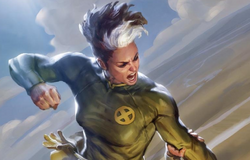 Earth-50543
Base Of Operations
The Outside
Characteristics
Gender

I can't even stand to look in the mirror. Every time I do I'm reminded of everything she stole from me.

Carol Danvers became Captain Marvel after an encounter with the Kree and would go on to become a founding member of the Avengers. However, one night during a confrontation with the Brotherhood of Mutants, Captain Marvel had her entire life force sucked out of her body by the mutant Rogue. Carol's consciousness then took over Rogue's body, eliminating her mind completely and trapping Carol in her body. She was able to maintain her powers of flight and strength, but on a much smaller level, and was cursed with Rogue's inability to touch another person without absorbing their powers or memories. Captain Marvel became emotionally distant from her teammates after this, and refrained from making many public appearances.

She was recruited into the Outsiders with the promise that if she returned to her home reality, Rogue's consciousness would return and take control back of her body, effectively killing Carol. She accepted the call to join the Outsiders and at first had strained relationships with her teammates until Sabre taught her how to open up and feel again.

From then on, Captain Marvel came to view the Outsiders as her family. Her love for them is what would drive her to sacrifice herself by flying the Terrax of Earth-9981, who had possession of the Power Cosmic, into the sun to stop him from consuming the Earth.

Skin to Skin Contact both empowers and drains her

Retrieved from "https://marvelcomicsfanon.fandom.com/wiki/Carol_Danvers_(Earth-50543)?oldid=245027"
Community content is available under CC-BY-SA unless otherwise noted.