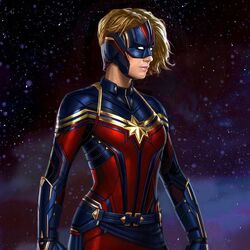 I never thought I'd say this, but... I'm going to rip Thor's head off.

Carol Danvers was kidnapped by the Kree Empire after being imbued with immense amounts of extradimensional photonic energy. She spent years as a brainwashed soldier before her memories began to return, and she betrayed her captors, returning to the human race as Captain Marvel.

She would go on to join the Avengers, where she would remain throughout the war between the Realms. She followed Captain America's lead to Latveria in order to best protect humanity, but has since come to the agreement that she will serve as the Avengers's field leader in battle situations.

Retrieved from "https://marvelcomicsfanon.fandom.com/wiki/Carol_Danvers_(Earth-2001)?oldid=260852"
Community content is available under CC-BY-SA unless otherwise noted.