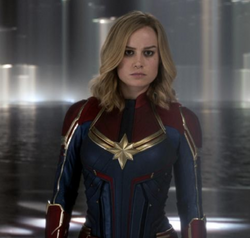 I'm done with you telling me what I can and can't do.

Carol Danvers was disowned by her parents at the age of 16 when she came out as a lesbian. She would later go on to join the Air Force, where she would suffer a brain injury after experiencing a crash that was fatal for three other flyers. Carol would later be approached by Potts International with an offer to fix her. Carol accepted, regardless of whatever the catch was.

She was then put through the process of Terrigenesis, and when she emerged, she was glowing. Literally. She gained invulnerability, as well as the ability to fly and absorb and redirect energy, making her one of the most powerful Inhumans on the planet. She was expecting to be made leader of the Squadron Supreme, but was relegated to second in command in favor of Captain America.

Potts International would eventually force the two Captains to enter a relationship to help with the Squadron's public image, despite both of them being homosexual. They rarely talk outside of Squadron meetings, and Carol even entered into a secretive relationship with the C-List Potts hero, Echo.

Retrieved from "https://marvelcomicsfanon.fandom.com/wiki/Carol_Danvers_(Earth-1515)?oldid=245801"
Community content is available under CC-BY-SA unless otherwise noted.