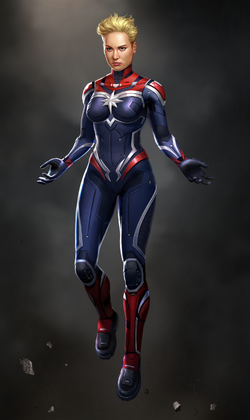 Carol Danvers was a fighter pilot in the Air Force, working on a special division in Project: Pegasus alongside Dr. Walter Lawson, who was revealed to be a Kree named Mar-Vell. After an attack on Project: Pegasus by Kree Sentries looking for Mar-Vell, Carol was badly injured and was given a blood transfusion from Mar-Vell before his subsequent capture and execution on Hala. The combination of their blood made Carol extremely powerful, leading to her being fashioned into a superhero by the government, taking the mantle Captain America to honor the fallen hero of World War 2, Steve Rogers.

When S.H.I.E.L.D. formed the Avengers Initiative, Captain America was the first hero recruited. Following their battle with Loki of Asgard, the Avengers left S.H.I.E.L.D. and set up shop working for Tony Stark, whom Carol does not particularly get along with.

Retrieved from "https://marvelcomicsfanon.fandom.com/wiki/Carol_Danvers_(Earth-1420)?oldid=245025"
Community content is available under CC-BY-SA unless otherwise noted.