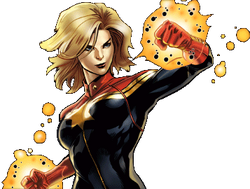 First appearance
To The Moon and Back

Carol Danvers grew up as the oldest child of three in a traditional Boston home, with a contractor father who believed in the merits of hard work. When he built their Cape Cod summer home, Carol insisted on working as hard as her two younger brothers, trying to make equal in her father's eyes. A voracious reader, she dreamed of becoming an astronaut and traveling to distant planets; as a teen she even hitchhiked to Cape Canaveral to view a launch there.

Her father however, could not accept women as men's equals, and when financial troubles meant he could only send one child to college, he chose middle child Steve despite Carol's superior grades. Carol graduated from high school first in her class and took a sales job. She turned 18 just a few months later, and the following day she turned her back on her father and joined the Air Force, intending to be a pilot and to get a college degree via the military. Her brother Steve's death in military action would eventually draw Carol back to her family, but she still never felt truly accepted by her father.

She quickly rose to the top of her Air Force class and was recruited into military intelligence (Special Operations) and trained as a spy. She accomplished many different missions and worked with other figures such as Logan (later Wolverine) and Benjamin Grimm (later the Thing), while oppressing others such as Victor Creed (later Sabertooth), and Natalia Shostakova (later the Black Widow).

NASA eventually requested her for an open position as head of security which she accepted, resigning from the Air Force bumping her to full Colonel at retirement. Becoming the youngest security captain in NASA's history, she became embroiled in the schemes of the interstellar alien Kree Empire. It was during this time that she met and eventually befriended the Kree soldier Mar-Vell whose enemies would soon be responsible for her future transformation. The next few months were disastrous as she was kidnapped by the alien robotic intelligence Cyberex and then hospitalized by a controlled Iron Man who attacked the Cape. The alien Yon-Rogg then kidnapped her while she was still concussed and eventually battled Mar-Vell. During this battle, Carol was knocked into a damaged Kree Psyche-Magnitron, a powerful device which could turn imagination into reality. Carol's genetic structure was altered effectively making her a half-Kree superhuman. She was unaware of this change for months.

Her successful career at NASA was severely damaged because of these recent events. Due to her continued inability to control superhuman incursions, she was removed and reassigned to a minor NASA facility near Chicago. Even this did not last as Carol was demoted to a mere security guard and returned to Cape Canaveral after the superhuman Nitro had raided the base. Due to her plummeting career, she resigned from NASA.

Now living off an accumulated salary, Carol wrote an angry tell-all expose on NASA, burning many bridges. The best selling book briefly made Carol a celebrity and she began working as an editor for many national magazines like Rolling Stone. However, she developed a dual personality due to the Psyche-Magnitron's alterations. She would black out and become a Kree warrior, instantaneously donning a costume in which the Psyche-Magnitron had created for her to ease her body's changes.

She continued to experience these blackouts, but they did not stop her from pursuing her career as a writer and editor. She took the name Ms. Marvel after Mar-Vell. Her fragmented mind eventually recovered with the help and treatments of the extradimensional Hecate and and the Kree Ronan the Accuser.

Superhuman Strength: Carol is super humanly strong and is typically able to lift about 75 tons. However, since she is able to absorb various types of energy, she can use this energy to temporarily increase her physical strength. Hence, she is ultimately capable of lifting in excess of 100 tons.


Superhuman Durability: The tissues of her body are considerably harder and more resistant to physical injury than those of an ordinary human. Ms. Marvel is capable of withstanding high caliber bullets, great impact forces, falls from great heights, exposure to temperature and pressure extremes, and powerful energy blasts without sustaining any injury. While channeling the energy she has absorbed, her body's resilience is extended to an even greater degree, even allowing her to survive in the vacuum of space for extended periods of time.


Superhuman Agility: Carol's agility, balance, and bodily coordination are enhanced to levels that are beyond the natural physical limits of even the finest human athlete.


Superhuman Reflexes: Her reflexes are heightened in a similar manner and are superior to those of the finest human athlete.


Flight: Carol is capable of propelling herself through the air at tremendous speeds. Although her top speed is unknown, she has been shown flying at three times speed of sound for several hours, so it is likely she can go much faster.

Seventh Sense: Part of her original power set as Ms. Marvel, Carol was subconsciously able to anticipate the moves of her opponents, though this power was not exactly reliable and activated randomly.

Near-Invulnerability: Carol possesses an amalgamated human/alien Kree physiology that granted her a degree of immunity to toxins and poisons, as well as a virtually indestructible body.

Minor Molecular Control: She can use absorbed energy to transform her regular clothing into her costume and vice-versa.

Photonic Blasts: Carol can fire powerful concussion blasts of photon and stellular light energy from her hands and fingertips.

Energy Absorption: Her body is capable of absorbing various types of energy for the purpose of temporarily enhancing her own physical attributes. She can augment her strength and energy projection up to the force of an exploding nuclear weapon.

Multilingual: Carol is fluent in English, Russian, and another unrevealed Earth language, as well as Kree, and Shi'ar languages. She speaks passable Rajaki and has a limited vocabulary in many other languages.

Expert Pilot: Carol is an accomplished pilot, having extensive experience with USAF planes as well as with Kree, Shi'ar and other alien starships.

Expert Combatant: She is extensively trained in armed and unarmed combat through Modern Army Combatives.

Retrieved from "https://marvelcomicsfanon.fandom.com/wiki/Carol_Danvers_(Earth-1010)?oldid=173162"
Community content is available under CC-BY-SA unless otherwise noted.