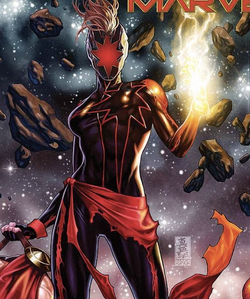 Sometimes we have to do the wrong thing for the right reasons. If you can't handle that, then you have no business calling yourself a hero.

Carol Danvers never got along with her family, as her parents were also overbearing and clearly favored her brother. As soon as she was old enough to leave them behind, she did. She went to enlist in the Air Force and quickly worked her way through it to become one of the best pilots they had. She was eventually selected to work on a project with esteemed scientist Dr. Walter Lawson, who was developing a lightspeed engine.

While working on the project, Carol and Lawson became very close friends. One day, they discovered that an alien fleet had entered the atmosphere, presumably to steal the lightspeed engine. While it seemed like Lawson knew exactly what was going on, a confused Carol offered to fly the plane to get away from them. Impressed with her vigor, he accepted and they engaged in aerial battle with the aliens.

Unfortunately, they were shot down and Carol discovered Lawson was bleeding green blood. He told her that his real name was Mar-Vell, and he was a member of the Kree Empire. From the smoke emerges his former teammate, Yon-Rogg, who shoots Carol and attempts to take both her and Mar-Vell hostage. However, in the ensuing struggle, Mar-Vell destroyed the lightspeed engine, which resulted in a large explosion. The radiation embedded itself into Carol, and Yon-Rogg was able to convince Mar-Vell the only way to save her is to bring her back to Hala.

She woke up days later with no memory and a blood transfusion from Mar-Vell. She was given the name "Vers" and trained to be a member of Starforce, as Mar-Vell had been prohibited from seeing her by the Supreme Intelligence and was subsequently imprisoned. After working with Yon-Rogg and Starforce for a few years, Carol began to feel something was not right. Getting flashes of her old life, she followed a hunch and discovered Mar-Vell in prison.

Mar-Vell helps her escape and return to Earth so that she can piece together the rest of her memory. However, Mar-Vell was captured once more and presumably killed by Yon-Rogg. Once she arrived on Earth, Carol found herself contacted by the shadow government agency S.H.I.E.L.D., and was befriended by the agency's Director, Nick Fury, who helped her get answers about who she really was.

Fury became inspired by Carol, who he had dubbed Captain Marvel, and invited her to join the Avengers Initiative. Feeling she had no place left to go and wanting to make up for the things she did with Starforce, Carol accepted. She then proceeded to fight alongside the team when the Earth was invaded by Loki and his Chitauri Army. After the Avengers split away from S.H.I.E.L.D., Carol went with them, but maintained her friendship with Fury.

Eventually, when Captain America, Iron Man, and Thor return from the future with a dire message, Carol was one of the first to concoct the plan to change the future. One of the prophecies foretold a Skrull invasion of the planet Earth, which resulted in Carol going insane and becoming an inter-galactic murderer.

Secretly, Carol began to formulate a plan with Captain America and Iron Man. After the Avengers failed to save Skrullos from Galactus, Captain Marvel used that as an opportunity to leave the team and adopt a new identity that would gain the attention of Thanos, so that she could get close enough to him in order to kill him.

Retrieved from "https://marvelcomicsfanon.fandom.com/wiki/Carol_Danvers_(Earth-101)?oldid=250179"
Community content is available under CC-BY-SA unless otherwise noted.