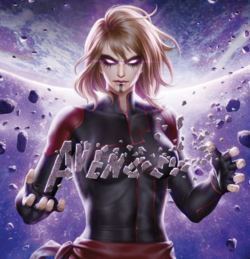 I will crush this pathetic resistance beneath my booted heel.

Carol Danvers is a half-human half-Kree fighter pilot who was imbued with extra-dimensional energy that turned her into an invulnerable weapon of mass destruction. After briefly fighting for the Kree under false pretenses, Carol later defected back to humanity, adopting the alias of Captain Marvel and joining the Avengers.

Captain Marvel would later join her teammates and fellow heroes in the fight against Thanos during his quest for the Infinity Stones. After the deaths of countless heroes, Captain Marvel and Thor eventually remained the last fighters standing. While Thanos used the stones to mutate Thor's DNA into that of a Frost Giant, he instead opted to rewrite Captain Marvel's mind.

Now believing herself solely to be the Black Marvel, Thanos's bride and primary enforcer, she has become his second in command and a scourge on the Resistance fighting against the Black Order's rule.

Retrieved from "https://marvelcomicsfanon.fandom.com/wiki/Carol_Danvers_(Dimension_0)?oldid=263474"
Community content is available under CC-BY-SA unless otherwise noted.