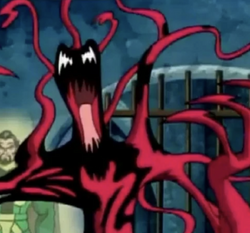 Cletus Kasady. Your heart is pure darkness... and now so is mine. Together, we will be Carnage!

When the Venom symbiote made its way into Ravencroft to free it’s host, Eddie Brock, it unintentionally spawned an offspring. Acting out of instinct, the offspring bonded itself to the closest person available; Brock’s cellmate, Cletus Kasady.

Kasady’s insanity instantly rubbed off on the symbiote, and they dubbed themselves Carnage with the sole intent to wreak as much havoc as possible. Spider-Man and Venom even found themselves forced to team up to defeat Carnage.

But no prison could keep Carnage and Kasady separated. For years they were one of Spider-Man’s fiercest enemies and a constant thorn in Venom’s side. However, after Carnage learned that Eddie Brock had been murdered by Kraven the Hunter, he set out to kill him.

But his vengeance was interrupted by the Guardians of the Galaxy, who got to Kraven first, and even took the Venom symbiote with them. Frustrated, Carnage decided to sneak aboard their ship and take his revenge out on them.

This proved to be a poor plan. The Guardians quickly took notice of him and docked their ship on the moon. He put up a fight, but soon enough both Carnage and Kasady were obliterated by Adam Warlock.

Varies Depending on Host

Retrieved from "https://marvelcomicsfanon.fandom.com/wiki/Carnage_(Klyntar)_(Earth-101)?oldid=250685"
Community content is available under CC-BY-SA unless otherwise noted.