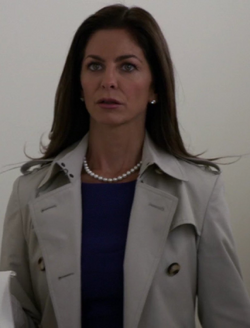 Carla married Glenn Talbot, and together they had a son named George.

Carla Talbot was walking with her husband and son through Potomac Plaza in Washington, D.C. jokingly discussing George's future. The eleven-year old told his parents that since he liked boats, he wanted to be in the Navy. After Antoine Triplett planted a phone on Glenn so Phil Coulson could warn him about Absorbing Man, her husband told her to get George and run.

Talbot continued her usual tradition of visiting her husband Glenn in his office on Tuesdays with Tacos for lunch. On one occasion, she called Glenn to inform him that she was stuck in traffic and would be late; Glenn appeared confused, claiming she had already arrived before he hung up the phone.

When she finally arrived at the office, she found the guard was missing, so she walked to Glenn's office. When she found him, he immediately pulled his gun on her, ordering her to lie on the ground. Carla did as she was instructed, horrified at her husband's shocking behaviour. Glenn realised he had made a mistake, as his offices had been attacked by a shape shifting assassin who had taken her appearance earlier.

Retrieved from "https://marvelcomicsfanon.fandom.com/wiki/Carla_Talbot_(Earth-1010)?oldid=139159"
Community content is available under CC-BY-SA unless otherwise noted.