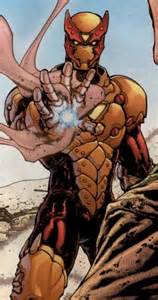 For unknown reasons, the Skrulls started the Secret Invasion on Earth. This Skrull posed as armored supervillain turned hero, Force. He and his partner infiltrated the Maggia as their respective superhuman identities (claiming he missed fighting Iron Man) and orchestrated weapons shipments; with the the actual weapons being from redirected S.H.I.E.L.D. transports.

Retrieved from "https://marvelcomicsfanon.fandom.com/wiki/Carl_Walker_(Skrull)_(Earth-6109.2)?oldid=124496"
Community content is available under CC-BY-SA unless otherwise noted.