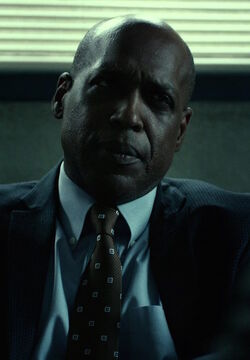 That's what I pay them for, isn't it?

Carl Hoffman was a detective for the NYPD. Around November 2011, Hoffman was recruited by Wilson Fisk along with his partner, Christian Blake to turn their heads to his illegal activities and tie up any of his loose ends in exchange for money.

When Karen Page was arrested for a murder committed by Fisk's men, Hoffman and Blake were put in charge of the case. When Page was nearly assassinated by a prison guard, Blake and Hoffman were left with no choice but to allow Page's lawyers Foggy Nelson and Matt Murdock to take her from the prison. It was later proven that Page was innocent.

Do you know who I work for?"
"Couple of dip-shit brothers no one gives a wank about.

Vladimir and Anatoly Ranskahov's henchman Piotr was arrested after an encounter with the man in the mask and Hoffman and Christian Blake were assigned to question him. Piotr offered the detectives the name of the man in charge of the criminal organization in exchange for a deal. When he told them Wilson Fisk's name, Hoffman and Blake knew they would have to kill him for betraying Fisk and asked whose turn it was to be punched to give the illusion of a fight. Hoffman was selected as the one to be hit and Blake punched him in the face before shooting Piotr.

Fisk ordered the Russian's strongholds to be destroyed and Hoffman and Blake were sent to investigate the burning buildings to find survivors. They found a Russian mobster who had been injured in the explosion and was unable to move. Hoffman and Blake began torturing the man by stepping on his wounds and asking where Vladimir Ranskahov had gone, as he had survived the explosion. The Russian claimed to not know so Blake shot and killed him before ordering the rest of the officers to kill anyone they find.

The detectives were sent to an abandoned warehouse where the man in the mask had taken officer Sullivan hostage while protecting Vladimir Ranskahov. They had to deal with journalist Ben Urich, who demanded to know information about the situation. When Blake and Hoffman mocked Urich for no longer mattering in the world of television media, Urich told them that he had plenty more stories in him and maybe the pair of them would make it in one one day. Under Wilson Fisk's orders, they organized SWAT team to arrive and kill everyone inside the building. Without warning, Christian Blake was shot in the shoulder, with both Hoffman and Urich desperately attempted to save his life.

With Detective Christian Blake shot and in a coma, Wilson Fisk feared he would speak against him if he was ever to wake up, so he called for a meeting with Hoffman to discuss what to do about him. Fisk and James Wesley suggested that Hoffman kill Blake but Hoffman was reluctant as he told them of his and Blake's history of knowing each other for 35 years. Fisk was able to change his mind by pointing out Blake's flaws, claiming Blake was responsible for the masked man's gaining of valuable information from Vladimir Ranskahov. Fisk bribed Hoffman with a sum of his choosing into injecting poison in his partner's catheter to finish him off.

Hoffman reluctantly agreed after being threatened and arrived at the hospital; Brett Mahoney was guarding the door but allowed Hoffman in after inspecting his bag, which contained a sandwich with a syringe hidden inside. Hoffman injected Blake with the poison, but, to his surprise, Blake awoke. Before Blake could raise the alarm, Hoffman was knocked out by the man in the mask. The man questioned Blake. Although the man was able to gain information, Blake did indeed die and Hoffman was able to claim that the masked man was the one who assassinated his partner.

Leland Owlsley approached Hoffman, knowing that the detective was disillusioned with Wilson Fisk's power and offered Hoffman a safe place to hide. They agreed to a deal in which Hoffman was paid ten million dollars and if Owlsley was ever killed by Fisk, then Hoffman would go to the police.

Hoffman lived in hiding for the next few weeks, with a team of armed guards around him at all times. One day however, a team of corrupt cops under Fisk's pay, led by Officer Corbin, stormed the location and quickly shot Hoffman's guards, leaving Hoffman covered in his guard's blood. Before Hoffman himself could be assassinated, he was saved by the masked man. The man offered Hoffman the chance to bring down Fisk, promising that he would be protected by Brett Mahoney and could use Nelson and Murdock as his lawyers as they could not be bribed. Hoffman was reluctant as he believed Fisk would have him killed for betraying him, but the masked man assured him that the alternative was worse.

Bringing Down an Empire

I need to make a statement.

Hoffman traveled to the police station, face still wet with blood, and met with Brett Mahoney. After hiring Matt Murdock and Foggy Nelson as his lawyers, Hoffman made a statement to the police and FBI in which he confessed to accepting bribes from Wilson Fisk and named all the people associated with Fisk's organization. This action resulted in the arrests of everyone involved with Fisk's plans, along with Fisk himself.

Retrieved from "https://marvelcomicsfanon.fandom.com/wiki/Carl_Hoffman_(Earth-1010)?oldid=189529"
Community content is available under CC-BY-SA unless otherwise noted.