Captain Marvel is an American superhero film based on the Marvel Comics character of the same name. It stars Yvonne Strahovski as Carol Danvers / Captain Marvel, Nathan Fillion as the voice of Mar-Vell, Liam Neeson as Nick Fury, Neal McDonough as the voice of Ronan the Accuser, Angelina Jolie as Abigail Brand, and Angela Bassett as Maria Rambeau. The film takes place in the Community MCU Reboot.

On the technologically advanced world of Hala, a group of rebel terrorists have started retaliating against the imperialistic Kree Empire. In response, Ronan the Accuser, a high-ranking member of the Kree's military force, goes before the Supreme Intelligence, the A.I. ruler of the Kree Empire, to propose a solution to the ongoing problem. Ronan suggests using their greatest weapon, the Cosmic Cube, an ancient artifact of great power stored away in the Kree vaults, to send a "message" to the rebels. Captain Mar-Vell, a Kree war hero, is also present for this. The Supreme Intelligence tells Ronan that he will consider this, but the last time they meddled with the power of the Cube, it yielded catastrophic results. Ronan goes before his troops, and tells them that the Supreme Intelligence has approved of his plan, which Mar-Vell knows to be false. Ronan tells his friend that they don't have the time for bureaucratic contemplation. These rebels are unpredictable, and the Empire needs to make the next move before they do. As Kree scientist Yon-Rogg finishes tracing a video threat from the rebels back to what they can assume is one of their bases, Ronan and his men head down to the vaults, and for the first time in many years, open the chamber containing the Cube, only to find it is missing. Tracking its unique energy signature, they see that somehow, somebody has stolen the Cube, and has fled with it into the cosmos. Mar-Vell volunteers to track them down, with Ronan warning him that they could be incredibly dangerous, and wishing him the best of luck.

In the depths of space, a Kree rebel named Bar-Konn is transporting the Cosmic Cube, when he is contacted by an ally of his, who sends him the coordinates to a planet off of the Kree Empire's map where he is to wait patiently with the Cube until further notice. He sets course for the planet, Earth, only to get struck by a meteor on his way there, causing his ship to spiral out of control. He does make it to Earth, but violently crashes into a barn in rural America. At a special Air Force base, test pilot Carol Danvers, who uses the callsign "Warbird," is flying an experimental new aircraft. 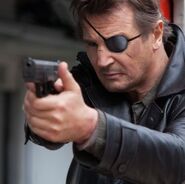 Supreme Intelligence
Add a photo to this gallery
Retrieved from "https://marvelcomicsfanon.fandom.com/wiki/Captain_Marvel_(Community_MCU_Reboot)?oldid=235582"
Community content is available under CC-BY-SA unless otherwise noted.