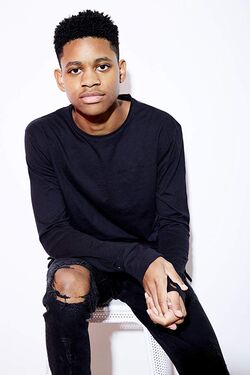 Dating
Occupation
Prince of Atlantis (formerly)
Vigilante (currently)
Education
Taught by the Royal tutors of Atlantis
Origin
Origin
Became half-human, half- Atlantean after being saved from drowning by Queen Althena, who gives him her life-force.
Place of Birth
Boston, Massachusetts, USA
Creators

Poseidon was born Cameron Darryl Raymond in Boston, Massachusetts to Darlene and Malcolm Raymond. He along with his older brother, Christopher lived in the upper-middle-class neighborhood and Cameron always has a sense of adventure, taking a liking for Indiana Jones and Steve Irwin. He even told his parents that he wanted to travel and they would just brush it off because he was just a child.

However, when Cameron was 7 years old, he went on a fishing trip with his paternal uncle until a massive storm hits the Atlantic Ocean, causing waves to crash onto the ship until a big wave demolishes the ship, killing all of the fishermen and Cameron's uncle while Cameron himself began to sink down the ocean, just seconds away from drowning. However, a female Atlantean named Althena who saw him and she gives him her life-force, which not only saved Cameron's life but changed his appearance slightly: his ears becoming pointy and gills growing behind his ears.

When Althena brought him into the city of Atlantis, Cameron wakes up, wondering why he was breathing underwater and Althena tells him that she saw him on the verge of drowning and she saved his life. Remembering what had happened moments ago, he becomes saddened that he won't be able to return to his family. This prompted Althena to start raising him on her own.

However, this caught the attention of her husband, Triton who was the king of Atlantis and when he did discover that Cameron was human, he confronted Althena about it. Althena ultimately told Triton that she saved Cameron from drowning and he couldn't return to his family. Triton eventually gives in and lets Althena care for him. Cameron could see the skepticism within the Atlantean king and he felt like he might have rubbed him the wrong way.

But Triton eventually starts to warm up to him and he began to teach him how to use his newly given powers thanks to Althena -- such as his super strength, agility, and even aquatic telepathy and water manipulation. Soon, Cameron began to adapt to the Atlantean civilization and was even taught and trained by the Royals of Atlantis when Althena and Triton weren't there.

Years passed and Cameron has bloomed from a little boy to a mature young man and he has been living well in Atlantis, making friends everywhere he went and his bond with King Triton and Queen Althena grew stronger as he got close to them. However, they start to suspect that Cameron still misses his real family and Triton decides to take him inside the castle and he takes him to the room where he showed him the Golden Trident of Neptune, which was used by his grandfather, Neptune many years ago followed by his father Poseidon. He gives it to Cameron, telling him about him missing his family and wanting to reunite with them. Triton also informs that he was giving him the Trident because he wanted to remind him about his years in Atlantis and how hard he and Althena worked to raise him and still considers him as his own son and he would use the Trident to control the great oceans because of the time he had lived in the kingdom.

Cameron eventually accepts the Trident and thanks Triton, but their bond was soon interrupted when one of the Atlantean guards informed Triton that they were under sudden attack by an incoming enemy. Many Atlanteans ran for their lives as the kingdom was under attack. Triton and Althena called in all of the troops and an all-out war ensued. Cameron tries to step into the battle, but Triton and Althena told him not to interfere and he must leave Atlantis. Cameron tried to protest, but he started to see their looks on their faces, he knew that he had almost lost his life and they didn't want him to lose his life again. Saddened, Cameron leaves Atlantis as the war continued, leaving the place he had now called his home.

Once Cameron reached to surface, he finds himself at the Coney Island Beach located in New York City instead of Boston. Determined to find his family (who thought he was dead), Cameron decided to go into the Big Apple in hopes in people would help him find his family. However, he was caught in a crossfire between the New X-Men, led by Archangel and Black Warlock, but the team was on the verge of defeat. Without any hesitation, he looked at the Golden Trident and remember his heart-to-heart with Triton and rose the weapon in the air. Calling out to the spirit of Neptune, he summoned the great Ocean and he defeated the monster, leaving the X team shocked.

After the defeat, Cameron was approached by Archangel and offers him to join the New X-Men. At first, Cameron wanted to refuse, but he realized that this might be a chance they might help him reunite with his family. He accepts the offer and joins the team and Archangel offers Cameron to help find his family. He soon names himself 'Poseidon' in remembrance of King Triton and Queen Althena.

Retrieved from "https://marvelcomicsfanon.fandom.com/wiki/Cameron_Raymond_(Earth-7090)?oldid=253585"
Community content is available under CC-BY-SA unless otherwise noted.