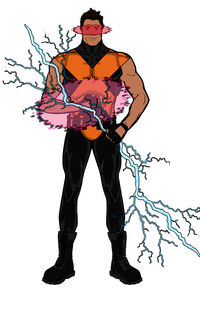 Cal first discovered the truth about his powers when he gained the powers of Jeanne Grey and Ororo Munroe, while they were shopping in New York. At the time, Calvino was on a trip to New York with his family, his high school sweetheart, and her family. Calvino then realized that his mimicry was the reason why he seemed to gain skills almost immediately. Later in the trip, he accidentally let his emotions go out of check when he saw his girlfriend cheating on him with a bus boy at the back of a restaurant that their families went to that night, thinking that Cal would have stayed in bed due to the fever he had that day. His anger caused him to accidentally access the telekinesis he mimicked from Jeanne. He threw the bus boy across the room into a wall. Objects in the immediate vicinity of where he used his powers also went flying in random directions as well. He didn't realize until it was too late that he was standing with his hand pointing towards the bus boy. A woman, walking out of the ladies room at the time, saw everything. She yelled out in fear about a mutant attack. Cal then panicked and ran out of the restaurant. Trying to call him back, his family ran out the door after him. He suddenly gained super-speed and quickly ran away.

The next day Cal woke up in the middle of a park where he had decided to sleep the night. He was very confused and frightened, and he didn't know where or who to turn to. While walking through the park, he came across a power signature that he had remembered sensing the night before, as he ran away from the restaurant. He then started to follow the signature because he wanted to find out what his new sense meant. Eventually, he sensed that the power signature was very close. From a distance, Cal saw a couple walking down the path towards him. His gut feeling told him that one of them was emitting the power signature that he came across earlier. Cal also realized that there was a second super-power signature being released from the other person. Thinking he had no one else to turn to, Cal walked in front of them and greeted them.

"Hello ummm..." "What do you want," said the boy in an annoyed tone. "Don't be rude," said the girl in a hushed tone to the boy. "Hello. My name is Wanda, and this is my brother Petrus. Is there something you wanted to ask us?" asked Wanda. Cal then looked around the area to find that there was no one in earshot of them. "Well," said Petrus bitterly when Cal didn't immediately begin to respond. "The truth is... I believe that you two are... mutants... like me... I don't no how to explain the reason how I know. For some reason I just know... I can sense it..." said Cal. Interrupting Cal, Petrus quickly interjected. "He doesn't know what he is talking about or know who he is dealing with. Let's go Wanda!" demanded Petrus as he began tugging his sister away. "Wait! Don't go. I came to you because I'm also a mutant! I don't know where else to turn! Please! Please... help... me..." bursted Cal as a sole tear began to run down his cheek. Wanda broke from her brother's grip, and then she slowly walked over to Cal. Wanda then hugged Cal, and she whispered, "Don't worry. You can come with us. You no longer have to feel afraid or alone just because you are a mutant. We come from Asteroid M. There, mutants have come together and thrived. We can provide you with food and shelter". "Wait! Prove it!," demanded Petrus in disbelief of his sister's unwarranted kindness. Calvino then ran around them with super-speed, which Petrus was able to see. Afterwards, Cal pointed at a large rock, which he then lifted up into the air through telekinesis. "Come with us. There's someone we want to introduce you to. He will like to meet you," said Wanda in delight as her brother stared angrily out into space. Wanda then, using her ability of altering probability, teleported the three of them to Asteroid M. Cal was then introduced to Magneto, who took him in as another Acolyte.

With Magneto's training, Mimic was able to hone his powers. Cal learned to use his powers with great skill. During his time on Asteroid M, Cal turned to Wanda for companionship because she had showed him compassion. After a while, he and Wanda entered a relationship after having become each other's best friend. They at first kept their relationship a secret since the Lehnsherr men were very protective of Wanda. After time, their relationship became more and more serious to the point where they admitted their love for each other. The two became almost inseparable, and they no longer hid their relationship. Petrus hated how close they were and openly disapproved their relationship, while Magneto allowed it. After two years of dating, Cal and Wanda started to talk about the idea of marriage when they were older. However, their plans were put to a halt after a Brotherhood mission went south.

While Wanda was incapacitated during a Brotherhood mission, Cal became worried when he lost telepathic contact with her. Fearing the worst, Cal teleported to Wanda's last known location. Cal found the Brotherhood in the middle of their first combat with the second generation of X-Men. Cal began to aid the Brotherhood by accessing all of the Brotherhood, X-Men, and his currently mimicked powers. Cal's anger at seeing Wanda badly wounded sent him into a fury, allowing him to overpower several of the X-Men. While the other X-Men attempted to aid their fallen comrades, the Brotherhood, with the unconscious body of Wanda, escaped. From miles away, Xavier could sense the onslaught and fear instilled into his X-Men. Charles went to Cerebro, to amplify his telepathic abilities, and he then shut down Cal's brain. Afterwards, Xavier sent his senior X-Men, who were on route to the mansion following a mission, to recover the newer X-Men.

Eventually, Cal woke up to find he was captured by the X-Men. They took him to jail. Before he was locked up, he spoke to Xavier. He told him all he knew about the Brotherhood and Acolytes. Cal then apologized for his actions. He explained that he knew it was wrong, but he truly believed that he had nowhere else to turn to if he left the Acolytes since he was sheltered from any knowledge of other mutant groups while on Asteroid M. Cal didn't tell Xavier that his other reason for being an Acolyte was so that he could be with Wanda, who he thought was possibly dead. Before he left, Charles told Cal that after he served his time, there would always be a place for him at the Xavier Institute, if he needed somewhere to go. Xavier then explained that Cal could learn more control over his powers, finish his education, and be around many other kids who were like him, while remaining in a safe and stable environment. Cal thanked Charles for the offer and said that he would think about it.

Cal served his year sentence, and was then released. Magneto did not allow any Brotherhood or Acolyte member from Asteroid M to rescue Cal because he believed that Cal had failed him and had also betrayed some of his secrets to Xavier. Cal would eventually join the X-Men at the Xavier Institute after he took years to travel, reflect, and learn what life around the world stored. Charles eventually let him become an X-Men member when he tracked Cal down so that Cal could help him rescue some of his students that had gone missing. The older X-Men didn't trust him at first. After many missions of trying to prove himself, the X-Men came to trust Cal. Cal became a valued member of the team. He also became best friends with Cyclops, Iceman, and Wolverine. He also became close friends with Jean, and developed feelings for her. He never pursued these feelings because he knew that she loved Scott, one of his best friends, and he didn't want to get in the way of their relationship. He never did lose his feelings for Wanda Lehnsherr over the years. Cal had learned that Wanda had in fact survived after all of those years, but he never pursued her because he knew they had divided loyalties. However, he still believed that a strong bond would remain between them.

Mimic possesses the strength of a normal human male who engages in intensive regular exercise and hence is able to press lift at least his own body-weight. He can also lift more weight depending on who he is mimicking.

Retrieved from "https://marvelcomicsfanon.fandom.com/wiki/Calvino_Rankin_(Earth-515)?oldid=156737"
Community content is available under CC-BY-SA unless otherwise noted.