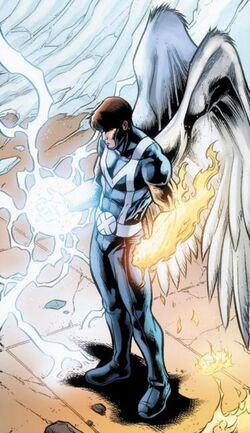 Single
Origin
Origin
After the NEW relaunch, Mimic stayed on with the X-Men and stayed on Wolverine's team.
Creators

Can I ask you an honest question, Mike? Am I worth the strength of 5 men? 5 very powerful men?

Mimic's history is exactly the same as that of Earth-616's Calvin Rankin up until the Marvel NEW! relaunch.

Mimic decided to stay on with the original X-Men after the Schism of power. He decided to take 5 totally new forms to represent his rebirth.

Mimicry: Mimic retains his mimicking powers from 616, allowing him to copy the powers of 5 mutants. He currently has stored Sunfire, Storm, Angel, Mystique, and Polaris For some reason, he could only mimic her secondary mutation.

Retrieved from "https://marvelcomicsfanon.fandom.com/wiki/Calvin_Rankin_(Marvel_NEW!)?oldid=256266"
Community content is available under CC-BY-SA unless otherwise noted.