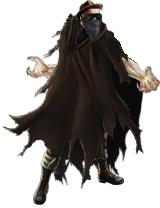 Caliban was an albino mutant who was born with a freakish appearance which caused his father to name him (or possibly only nickname him) after the grotesque being in William Shakespeare's The Tempest. At some point, Caliban was recruited by Callisto, to use his superhuman ability to locate other mutants for her, whom she organized into the underground community known as the Morlocks. Caliban lived beneath the Manhattan streets with them, in The Alley, but felt lonely, even among his fellow mutant outcasts.

The Morlocks were being massacred by the Marauders. Caliban escaped and contacted the X-Men Nightcrawler and Colossus, who attempted to get the Marauders out of the Alley. However, they were captured by Mr. Sinister and Caliban was aided by Iceman, who rescued his friends and the former Morlock.

Caliban originally possessed the normal human strength of a man of his age, height, and build who engaged in minimal regular exercise. However, he can draw from the fear of nearby people and use it to enhance his strength. The limits of that superhuman strength are unknown, but he proved he could easily outmatch the original Spider-Woman, who could lift (press) about 7 tons.