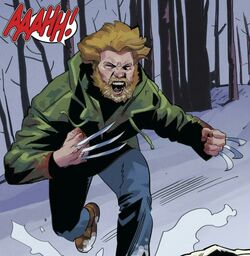 Earth-5888
Base Of Operations
The Nexus
Characteristics
Gender

Descended from the Howling Commando Dum Dum Dugan, Caleb Avery never intended to lead a violent life. However, his sense of honor instilled in him at a young age guided him into enlisting in the military, but even that did not provide him with much action. His service was eventually cut short and he was sent back home, due to an overwhelming amount of peace around the world.

Settling into a quiet role as a High School History teacher, Caleb married his old girlfriend, Linda, and for a few years the two of them had a genuinely happy life. But then Caleb's latent mutant powers erupted. From each hand sprouted three bone claws, and in his panic, he accidentally stabbed Linda, killing her almost instantly as he cradled her body and cried.

Mere minutes later, he was ambushed by a squad of Weapon X Agents, who had been monitoring him for some time. It turned out they had access to his DNA, which provided cues that hinted at a possible mutation, but even they were surprised when his mutation turned out to be exactly identical to their former test subject, the Wolverine. Caleb awoke in a Rebirth Chamber, faced with William Stryker, Jr., who questioned him about his relationship to the Wolverine.

Confused and distraught, Caleb claws his way free and kills Stryker, Jr., going on a rampage throughout the base. However, his inexperience led to him eventually falling to the overwhelming force of Weapon X. Their new leader, Bolivar Trask, who had lost his hand and eye to the Wolverine, insisted on brainwashing Caleb before infusing Adamantium onto his skeleton, in order to ensure his obedience.

He eventually woke up with no memory of who he was, only that his name was supposedly Weapon 13, and that it was his duty to follow the orders of his captors. For years he was sent on assassination after assassination, undergoing constant mind wipes. He eventually crossed paths with a fellow brainwashed assassin, the Winter Soldier, who had undergone the same treatment from Hydra. Incidentally, they had both been sent to assassinate Charles Xavier during a press conference about mutant rights, and wound up engaging in battle with each other in order to complete their respective missions.

However, this only resulted in drawing attention to them, and Xavier sent in the X-Men to defuse the battle. Jean Grey was shocked to see someone with the same powers as Wolverine, and decided to end the battle by digging deep into both of their minds and restoring their memories, an act which temporarily put her into a coma. Both Caleb and the Winter Soldier were overwhelmed by this, and quickly made their escapes. Caleb allowed himself to be collected by Weapon X agents, which gave him the perfect opportunity to tear apart the organization from the inside, and truly make his escape.

He made his way into a small town a few miles out from the Weapon X base and threw on the first pieces of clothing he could find. However, not long after he took refuge in a small diner to attempt and gather his thoughts, the entire town was sieged by Reavers, who had been contracted by Weapon X to take out Caleb should he ever go rogue. He engaged in battle with them, killing over a dozen Reavers before they were able to gain the upper hand, shooting multiple harpoons through his chest, and stabbing him through the heart. As he started coughing blood, a Reaver came close to taunt him, but Caleb noticed a grenade strapped to his belt, so he mustered all of his strength to slash forward, setting off the bomb and setting off an explosion.

When the dust cleared, however, Caleb was no longer in Canada. He had been plucked out of his reality by the Silver Sentry, who brought him to the Nexus, alongside an alternate version of Cannonball. He explained to the two of them that they had been recruited onto Team X, and their new mission was to travel the multiverse and repair damaged realities. Believing he was simply having a fever dream at the moment of his death, Caleb shrugged and accepted the offer, as he and Cannonball were thrust onto the Team alongside Cyclops, Scarlet Witch, Angel, and Storm.

Caleb was annoyed at having to explain to his teammates that he was not Wolverine, nor did he have any relation to Wolverine, and he did not want to be called Wolverine whatsoever. His name was Caleb, he had just gotten in back, and he was intent on not needing a "stupid code name". He did, however, form something of a friendship with the Scarlet Witch, finding himself grateful to her, due to his reality's version of her being responsible for restoring his memories. The two found themselves attracted to each other, but agreed not to let anything happen as to not jeopardize the team. However, almost immediately after Angel died and Angela was placed on the team, Caleb found himself engaging in purely sexual activities with her on a fairly regular basis in between missions.

Team X eventually found themselves in a reality where all of mutantkind had rallied behind Polaris following the public executions of Charles Xavier and Magneto. However, their cause had grown beyond violent, and they were on the verge of wiping out humanity completely. Team X's mission was to partner with the Avengers and take down Polaris by any means necessary, but in doing so Caleb attacked her recklessly, resulting in her manipulating the Adamantium on his bones to melt on a molecular level, completely destroying his insides and forcing him to die a slow and painful death as his body tried to heal, but continued to fail. At this point Angela had already left the team, but his original teammates, Jean and Storm, were there to comfort him as he passed. In his last breaths, he promised them he would be okay, and he would finally be able to rest in the afterlife with his wife.

Retrieved from "https://marvelcomicsfanon.fandom.com/wiki/Caleb_Avery_(Earth-5888)?oldid=253038"
Community content is available under CC-BY-SA unless otherwise noted.