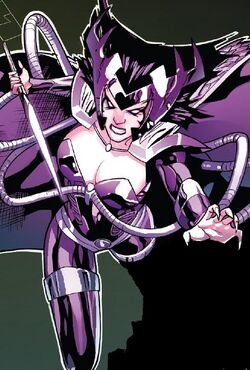 You are not my sister. You are a traitor to the Empire!

Cal'syee Neramani is the third child of Majestor J'Son', but only the second to born to pure Shi'ar blood. She was raised as a ruthless killer, expecting to one day inherit the throne. She believed her sister, Lilandra, was too weak to lead the Empire.

When Lilandra abandoned the Shi'ar Empire to live on her own, Cal'syee became overjoyed. However, her father took it to mean that he could not relinquish control, and tightened his grip on the Empire. Cal'syee decided to take out her anger by adopting the name Deathbird and throwing herself into military service, where she formed something of an antagonistic relationship with the Gladiator.

However, when Deathbird's half-brother, Star-Lord, joins the Empire, she became enraged at her father's dedication to him. When the arrival of the Guardians of the Galaxy led to a siege by the Black Order, Deathbird saw this as her opportunity to lead by example and prove to her father that she was worthy of the throne. However, during the battle she found herself locked in combat with Proxima Midnight, who gained the upper hand against Deathbird and used her staff to impale her, electrocuting her from the inside.