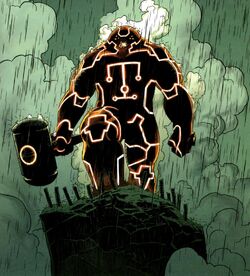 Cain Marko was always jealous of his half-brother, Charles Xavier, for getting all the praise from his father, and for being smarter than him. In an attempt to distance himself from Charles, Cain dropped out of High School and enlisted in the army. While serving overseas, he discovered a mystical gem that, when he touched it, he became imbued with the powers of the Juggernaut. Drunk on power, Cain abandoned the military and decided to use his strength to finally kill Charles Xavier.

However, Juggernaut arrived just in time to witness Apocalypse absorbing his essence and his powers. Partially upset that Apocalypse had stolen his revenge, he was more amicable when Apocalypse offered him a spot by his side to bring the world to its knees. Juggernaut then became the Horseman of War, and eventually, with Apocalypse's help, slaughtered Cyttorak, the being who gave him his powers, and became even stronger.

Retrieved from "https://marvelcomicsfanon.fandom.com/wiki/Cain_Marko_(Earth-9999)?oldid=245206"
Community content is available under CC-BY-SA unless otherwise noted.