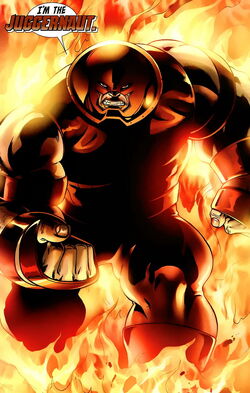 Juggernaut's history is identical to that of his Earth-616 counterpart up until being launched into space by Skaar. He landed in the backyard of Psylocke's Lake House in England. After being nursed to health, Cain became an agent of MI-13 in America as a favor to Brian.

Juggernaut discovered Videoman attempting to hold up a corner store. He decided to intervene, and was soon assisted by Sandman. The two form a partnership, and are able to defeat several menacing threats. He continues to serve as an MI-13 agent, gathering intel on the side.

During his last intel mission for MI-13, Cain encounters Carter Ghazikhanian. Juggernaut becomes quite angry, as he assumes that Carter is following him, and he has ties to the X-Men. He attacks Carter, only to realize Carter is too young to act as an agent of the X-Men. He remembers that Carter was a friend of Squidboy, and lets him go. Carter retaliates, and knocks Juggernaut out. After waking, Carter attempts to flee, but Cain convinces him to remain. Carter tags along with him, as he recalls a memory where Jean Grey, as Phoenix, taught Carter some of his latent abilities, including resurrection. He secretly hopes to return Squidboy to life, and begins to track Phoenix with his allies.

The group is then attacked by Vulture, who was trailing Sandman and was angry that their partnership was ended. Sandman insists he has reformed, so Vulture attempts to kidnap Carter, but is tackled by Juggernaut. This increases the bond between the three.

Carter convinces Juggernaut to return to the Xavier Institute. Using his step-brother and Cerebra, they are able to find and meet Phoenix. She resurrects Squidboy, but his personality has changed. He no longer has a buddy in Squidboy. He is angered and attacks Phoenix, but she easily defeats him. She drains his powers partially, and states she will kill him the next time they meet. Squidboy now begins to warm up to Juggernaut. He attempts to be trained by Juggernaut, who accepts.

Superhuman Strength: The Juggernaut possesses virtually limitless superhuman strength, which is endlessly furnished by Cyttorak. He proved strong enough to create a shockwave through thunderclap. The Juggernaut has stated his strength easily rivals Thor's physical strength.

Superhuman Speed: Despite his immense size, Cain's super-humanly strong leg muscles allow him to run and move at speeds beyond the natural physical limits of the finest human athlete. He can run at speeds of 110 miles per hour or more.

Super-humanly Dense Tissue: The Juggernaut's skin, muscle, and bone, is exactly 4 times denser than the same tissue in the body of a human being, greatly contributing to his superhuman weight.

Invulnerable: Cain is invulnerable to all forms of physical injury. His durability is potentially limitless. The Juggernaut's skin cannot be broken, and he is incapable of feeling pain, or sustaining any form of injury from any purely physical attack regardless of magnitude or intensity. Although Cain is able to be harmed by exceedingly high levels of mental attack, mystical attacks or weapons with mystical properties can hurt Cain. These attacks work because they counteract, in some way alter, or reduce the mystical energies that make Cain invulnerable. However, these attacks have rarely been shown to cause any permanent damage.

Regenerative Healing Factor: Despite his complete resistance to physical attack, Cain can be damaged by sufficiently powerful mental or mystical forces. If damaged, Cain possesses a regenerative healing factor that enables him to completely regenerate with superhuman speed. His healing is incredibly powerful, able to reform from a skeleton. Essentially as long as there is a molecule of Cain's body and a molecule of the power of the Crimson Gem of Cyttorak still upon him, and he is still the Exemplar of the ruby, the Juggernaut will regain his full power and be completely healed, suggesting nothing is drawing or blocking the gems mystical energies from resonating, and all of the energy becoming one again.

Self Sustenance: The Juggernaut is completely self sustained, he has no need to breathe, eat, or drink at all. He cannot tire, hence he cannot sleep, however his self generating mystical energies provides him with the nourishment of sleep, nutrition, hydration, and oxygen. He is sustained by his mystical energies alone.

Immortality and Immunity: Cain is immortal. He is not a millisecond past his absolute physical prime, and is immune to aging. Nothing except perhaps total molecular disintegration, can kill Cain. The Juggernaut is also immune to all toxins, poisons, and disease.

Force Field: The Juggernaut is capable of generating a personal force field around himself, extending to about 1 foot in diameter from his body. He uses this force field for many purposes, such as preventing physical contact, keeping debris and unwanted materials off of himself, and escaping piles of debris. However the most important purpose of the field is if and when he is cast in solidifying material such as concrete. If he were to be put into this kind of hard cast which would keep his motion prohibited, he can erect this force field to break out of a cast. Hence without this force field he could not be unstoppable. The force field is also particularly resistant to casting materials in the first place, as they tend to slide off much faster and more smoothly then they do from his body alone. His force field can also help Cain resist mystical attacks. Mystical weapons that can hurt Cain have to penetrate his force field first, making it even more useful.

Embodiment of irresistible force: Once he begins to advance in a certain direction, it is virtually impossible to halt his movement. Some obstacles such as many tons of rocks and plasma-discharge cannons have slowed his pace but can't completely halt him. The only known examples of him being stopped involve physical force with mystical involvement, which is Juggernaut's sole weakness.

As a result of his days in the military and his experiences as a superhuman, the Juggernaut is a formidable hand to hand combatant preferring to use street fighting and brawling techniques that allow him to make full use of his great strength.

Equipment: Juggernaut wears an armor and helmet made of an unknown metal. His helmet blocks telepathic interference.
Transportation: None known.
Weapons: None known.

Retrieved from "https://marvelcomicsfanon.fandom.com/wiki/Cain_Marko_(Earth-858)?oldid=40049"
Community content is available under CC-BY-SA unless otherwise noted.