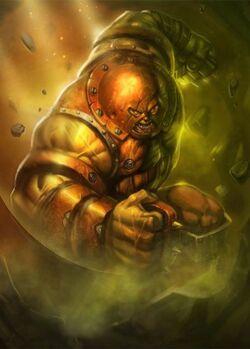 Well... Living a life like this is a lot better than living life as a mutie terrorist, or much worse... A stupid living meme on the internet...

-- Juggernaut as he starts a new life

Cain Marko is the son of Dr. Kurt Marko (an atomic researcher and a former soldier) and Marjorie Marko. Cain's parents separated and he was eventually sent to boarding schools, which he got expelled from. Cain's mother died shortly thereafter when he was only three. After his father's apparent death, Cain decided to join the U.S. Army and later in the U.S. Navy during the first World War, as a courageous act act to honor his recently-deceased father and mother.

At some point during thewar, Cain discovers his mutant powers and abilities by accidentally pushing an enemy soldier, throwing him through a wall, after losing all of his military firearms and weapons during the battle, just to save his fellow soldier. This made his fellow soldier, who was actually Colonel William Stryker later get his men to capture Cain and incarcerates him by the Weapon X Program and forced to act as a living weapon under Stryker's direction. There he also met a fellow mutant by the name of James Howlett, who later became the Wolverine after he manages to escape imprisonment after a while.

When the Brotherhood removed the security implants that were prohibiting the mutants from leaving their cells, Juggernaut eventually fought for his freedom, smashing through every obstacles that were coming his way including the guards and accidentally some mutants. After the entire ordeal, Cain was offered a place with the Brotherhood by Magneto.

Cain then chose The Brotherhood without hesitation, and that from day on he became one of the most loyal known members of the mutant supremacy, fighting against mankind for he believes is a threat to mutantkind for torturing them and treating them like lab rodents or aliens who don't belong on this society.

After a few years of being a villain and a mutant terrorist, Marko eventually earned Magneto's trust and later became one of his so-called "loyalists" along with several others, which also earned him a higher rank as one of his strongest forces within the Brotherhood. However, their loyalty would be put to the test after a new member was accepted by Magneto to join the Brotherhood, revealing to be the "mutant" scientist Nathan Essex, who was otherwise known as Mister Sinister. Despite his controversies regarding if he was really a mutant or if he was actually just a mutate and a few of Magneto's loyalists believing that accepting Sinister would be a terrible and horrendous choice for the Brotherhood's future, Essex would later prove himself to be a worthy member of the Mutant Supremacy, with Magneto even believing that he was worthier and more useful than most of his loyalists, offending them in the process, including Marko himself.

Thanks to Essex's being a genius and having great scientific aptitude and knowledge on studying Mutants and having the ability to enhance their very mutation to a next level, which have impressed Magneto and the rest of Genosha's residents, though it still made Sinister more suspicious individual to a few of Magneto's loyalists, which included Mystique, Sabretooth, Marko, and a few more.

Despite all their concerns towards Essex, Magneto still took it all very lightly, implying that Essex has the very key towards the next step of mutant evolution and the eventual defeat of the X-Men, and even if he ended up betraying them, Magneto would never even hesitate to banish him out of the Brotherhood, or even kill him if they have to through necessary means, or much worse. They agreed, though Magneto's strong trust on Sinister still made them feel uncomfortable, and left out as his followers as Magneto seemed to have relied too much on Essex's abilities and knowledge alone.

After a few months after Essex earned Magneto's trust into making him one of his highest-ranking lieutenant generals, he finally planned out and declared war on humanity and mutants who would dare to stand on their way all by himself without Magneto even having to know or become aware of it, starting with the eastern European country of Sokovia, a country known for being populated by mostly anti-mutant residents and politicians, a country that the Brotherhood would've vexed with the most. There, Sinister intentionally led Magneto's loyalists into causing wreak and destruction on the city of Novi Grad without having any orders from Magneto, which immediately got the attention of the X-Men.

After arriving at the scene, the X-Men somehow found Magneto standing on top of the ruins of the city, where they confronted him as they destruction continues to recommence. They argued against him, asking him why would he attack a city full of innocent people when they had done nothing wrong to them at all. Magneto strongly and angrily disagreed, implying that the very people of this city have said and have done enough to offend mutantkind for a very long time since then. According to him, Sokovia was the perfect city of how much humanity have been treating mutants like they don't belong in their society.

Having no other way to confront them in a more civilized manner, the X-Men had no choice but to apprehend the Brotherhood through force, as usual. As they face off, both the X-Men and the Brotherhood battle it out to prevent further destruction on the city. After a difficult and rough battle, the X-Men still won victoriously, apprehending several members of the Brotherhood with the exception of the man they thought was Magneto and the rest of his loyalists (who wasn't even aware that their leader wasn't exactly who they thought was), who managed to escape their way back to Genosha, where they would later find another Magneto, the real one, who looked very furious at them for being so reckless on attacking the city without his orders.

After seeing two Magnetos at once, the real Magneto and the loyalists were confused to see who the impostor was, though it was immediately answered after the impostor intentionally reveals himself to be Sinister. Essex then revealed his true plans to Magneto and his intentions to the Brotherhood such as the threatening Magneto of eradicating mutantkind and allying himself with several organizations Magneto has despised of, including the Nazi-based Hydra which Magneto had been despising off.

As a result, Magneto demands Sinister to leave his team, though during his time as a member he manages to earn the trust of several mutants, gaining allies inside the Brotherhood and those members include three of Magneto's loyalists, Multiple Man, Mastermind, and Hard-Drive, while the rest of the traitors had been brainwashed by the villain, leaving only few members who still stood by Magneto's side, his loyalists. Cain then tried to subdue Essex along with his fellow loyalists, but was unexpectedly tackled by a brainwashed Blob, distracting him from taking down Sinister. Blob almost overpowered Cain in battle thanks to being powerfully enhanced by Essex, but thankfully was helped by both the Hulk and the Thing and with both their efforts, they managed to beat and knock Blob down, releasing him from his state of being mind-controlled.

Due to Sinister's betrayal, the Brotherhood broke into two factions, Magneto's and Sinister's side. Alongside Juggernaut, Mystique, Sabretooth, Blob and the remaining members of Magneto's side, Magneto and his faction later allied themselves with the Ultimates and the rest of the heroes to end Sinister's reign of chaos. But despite their victory in helping the defeat of Sinister, the Brotherhood never manage to reform its state on Genosha, causing for them to have a momentary hiatus and split apart throughout the rest of different parts of the world, remaining to be hidden from the authorities, who began their search on mutant terrorists after the events of the war.

After the Ultimate War, Cain went to remain hidden from getting captured just like the others, abandoning his Juggernaut identity, and traveled to the vast wilderness of Exmoor, in the southwest areas of England, where he found peace and silence to start and rebuild a new life in the woods, having to isolate himself from his old life as a Brotherhood member and a wanted fugitive, at least for now.

In spite having to abandoned his terrorist activities, unlike the rest of the Brotherhood who still slowly reformed through different factions a little later, Cain's views on humankind are still and would always stay the same, which made him into having thoughts of rejoining the Brotherhood, which he would, only at a later time, but for now, Cain had no other choice but to start his new life in the woods, as a man known as Zane Young.

Homo Superior Physiology: Cain Marko is a mutant who was enhanced by the with superhuman strength and durability that turns into what is basically a human juggernaut. His powers grant him the following:

Cain is susceptible to extreme mental and strong magical attacks.

Retrieved from "https://marvelcomicsfanon.fandom.com/wiki/Cain_Marko_(Earth-61615)?oldid=265669"
Community content is available under CC-BY-SA unless otherwise noted.