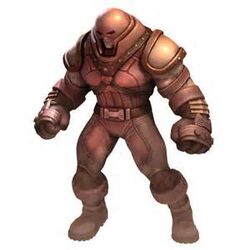 Single
Occupation
Adventurer; formerly professional criminal, mercenary, soldier
Origin
Origin
Cain gained his powers while on a expedition in Asia when he came across the Crimson Gem of Cyttorak and has upset Cyttorak on many occasions, resulting in restrictions and even the loss of his power.
Place of Birth
Berkeley, California
Creators

Little is known about Juggernaut's life before the Secret War. It can be assumed to be similar to his mainstream counterpart.

Juggernaut was among the members of the Ultimate Alliance during the mission to Latveria, and later joined the Anti-Reg heroes in the Super-Human Civil War. In the aftermath of the war, Juggernaut continued to battle the nanite-infected superheroes and supervillains.

As a result of his days in the military and his experiences as a superhuman, the Juggernaut is a formidable hand to hand combatant preferring to use street fighting and brawling techniques that allow him to make full use of his great strength.

Cain is susceptible to exceedingly high levels of mental and mystical attack. Mjolnir once for example was able to absorb and negate Cain's formerly impenetrable magic Force Field. Both types of attacks have been shown to be able to harm him, but neither have been shown to cause any type of permanent injury. His weakness to mental attacks are typically nullified by his helmet, and after his latest upgrade, he is now completely immune to psychic assault even without his helmet. If Juggernaut does not use his powers for his own personal desires, the power of the gem does not work correctly and does not fuse with his soul, essentially making him a human with only a portion of some of his powers. Also, being infused with unstoppable force can be used against him, as Hulk did during one of their battles, deflecting Cain's charge, causing him to speed away, unable to stop himself.