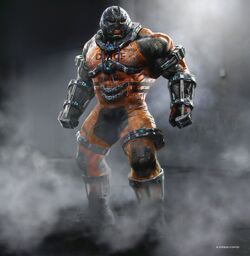 Don't you know who I am?

For the first few years of his life, Cain Marko had never met his mother. He eventually discovered that she was a British woman named Susan Xavier when she married his father following the death of her previous husband. He also discovered that due to his relation to Susan, he also had a half-brother, Charles Xavier.

Cain instantly disliked Charles, and was one of the first people to realize that he had mutant powers. He called Charles a freak and constantly picked on him even until they graduated from High School. From there, Cain never had any desire to speak to him again, but began to develop an obsession with the power mutants held.

Feeling small and thinking he'll never be able to live up to his brother, Cain joined the military and quickly shipped out to Afghanistan. While serving there, he discovered an ancient abandoned cave that contained the Gem of Cyttorak. When he touched the Gem, Cain was transported into Cyttorak's Realm, who offered to imbue Cain with unimaginable power, so long as he agrees to become his avatar in the physical world.

He instantly agreed, and became the Unstoppable Juggernaut. Believing himself to now be above petty human squabbles, he went on a rampage through a battlefield and decided to finally take vengeance on his brother. It was then that he discovered Charles had formed the superhero team the X-Force, who Juggernaut decided were his enemies. He would then dedicate everything he had to killing them and tearing down everything mutants have accomplished.

However, despite his immense power, Juggernaut was met defeat after defeat, constantly finding himself in prison. Eventually, when the Avengers teamed up with the US Government to form a strike squad of reformed supervillains, Juggernaut was offered the chance to use his powers to do some good. He was reluctant, but saw it as an opportunity to move past his obsession with mutants and believed it to be his only way to truly stay out of prison. From then on, Juggernaut has been serving as a member of the Thunderbolts, unknowingly carrying out the Avengers's mission of preventing the Prophecy of Infinity.

Retrieved from "https://marvelcomicsfanon.fandom.com/wiki/Cain_Marko_(Earth-101)?oldid=250178"
Community content is available under CC-BY-SA unless otherwise noted.