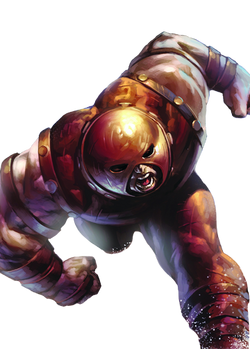 I'm unstoppable. I knew that. I rampaged, I used by unstoppable nature to cause havoc. But then, I knew what was wrong with me. Hey, I know that the Avengers are only some sort of strike squad. But I do know, that we can be unstoppable as well. I'm unstoppable, and I'm gonna use it for good.

Cain Marcus was born to two parents who were war veterans. His mother was a medic, and his father a former fighter in World War II, who joined the fight after the Pearl Harbor bombing. Cain's parents, although retired, were still busy with their jobs. His mother became an engineering consultant, while his father became a manager at a fast food chain. Feeling neglected, Cain became a bully at school, known for his hot-headed temper and for being physically "unstoppable". His teacher described him as an "ex-bodybuilder". When he was a teenager, Cain became a professional football player, until he dropped out of high school due to financial problems.

In adulthood, Cain became a soldier, just like his father. He joined the United States Army, and was a decorated soldier, at the rank of Colonel. But when he was given a medal of honor, he got news of his father's death after being hit by a train in a drunken state (he's old, anyway). His mother died two weeks later due to an unknown cause. Cain's career in the military was OK until a mission in Greenwich, England transformed him forever.

Cain and his squad were in pursuit of a terrorist cell, hiding in a forest near Greenwich. Cain and his men found the cell, shut it down, but at the cost of all his men's lives. Cain, seemingly desperate, ran away to a cave. However, he didn't know that the cave contained the Crimson Gem of Cytorrak, which was owned by the demon, Cytorrak. Anyone who touches the gem becomes a "human juggernaut". The Gem actually wasn't special or specific to England. The Gem actually can be located everywhere around the world. Cain just found one in Greenwich. Curious, Cain touched the gem, and seemingly blacked out. When he woke up, he found himself in front of Cytorrak, the Demon of Destruction, and a former Elder God. Cytorrak explained to Cain that anyone who touches the gem will be transformed into his avatar, by his will. Cain, surprised by this, panicked, until Cytorrak saw his past. Cytorrak deemed that Cain was appropriate to become his avatar, and informed him that he would be his avatar on Earth. Cain, thinking for a pretty long time, then accepted the offer, saying that he can do a lot of things when he's back on Earth. Cytorrak then happily transformed him into the "Juggernaut", and teleported him back to Earth.

Once Cain got back to Earth, he went out of the cave, and saw his new, bulky form, complete with a red "uniform". As he went out, he saw that the SAS was sent to find the remains of Cain's squad, and the terrorist cell. Surprised by the sight, the captain of the SAS strike squad ordered the team to open fire on Cain (not knowing it was Cain Marcus). After all of the SAS members ran out of bullets, the Juggernaut demonstrated his new powers on the soldiers, defeating and possibly killing them all. After that, Cain escaped, in the process destroying most of the buildings in Greenwich.

Some times after Cain's transformation into Juggernaut, he was branded as a superhuman terrorist, and watched (and repeatedly engaged) by HATE. He rampaged and destroyed through many properties and countries, until one day, he encountered the Avengers in Paris. The Avengers were there to fight the Juggernaut, in order to recruit him. At first, Juggernaut was "disturbed" by Boomerang. He nearly killed him, but Detroit Steel intervened. Cain easily dispatched Detroit Steel, and later, nearly all of the Avengers members. He was defeated by Troll, who overwhelmed him with her combat skills. He also encountered the Director of HATE, seemingly recognizing him. He was put in the HATE Helicarrier, UNN "Gamma" for his integration to the Avengers. During these times, Juggernaut actually got a little crush on Troll.

Cain is able to lift up to 100 tons, or more. His strength virtually has no limits.

Retrieved from "https://marvelcomicsfanon.fandom.com/wiki/Cain_Marcus_(Earth-4045)?oldid=234957"
Community content is available under CC-BY-SA unless otherwise noted.