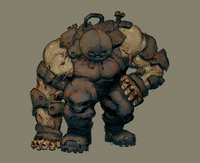 Cain Marco is a Mutant with exceptional strength and a member of the Brotherhood of Mutants. In late 2014, he allied himself with Klaw, Radioactive Man, Black Knight and Batroc the Leaper to steal Vibranium from Wakanda. Although he and his allies were defeated by Black Panther and the X-Men.

Superhuman Strength: The Juggernaut is sometimes listed to possess virtually limitless superhuman strength, and other times simply as class 90 or 100.

Supernaturally Dense Tissue: The Juggernaut's skin, muscle, and bone, is exactly 4 times denser than the same tissue in the body of a human being, greatly contributing to his superhuman weight.

Invulnerability: Cain is virtually invulnerable to all forms of physical injury. Although Cain is able to be harmed by high levels of mental attack, mystical attacks or weapons with mystical properties.

Regenerative Healing Factor: If damaged, Cain possesses a regenerative healing factor that enables him to completely regenerate with superhuman speed.

Self Sustenance: The Juggernaut is completely self sustained, he has no need to breathe, eat, or drink at all. He cannot tire, hence he cannot sleep, however his self generating mystical energies provide him with the nourishment of sleep, nutrition, hydration, and oxygen. He is sustained by his mystical energies alone. He once even kept talking and fighting after being reduced to a skeleton.

Contaminant Immunity: The Juggernaut is also immune to all toxins, poisons, and disease.

Retrieved from "https://marvelcomicsfanon.fandom.com/wiki/Cain_Marco_(Earth-1111)?oldid=195951"
Community content is available under CC-BY-SA unless otherwise noted.