As the fight took place, a wave of cosmic energy hit the ship, destabilizing it for a second. Suddenly, the room was covered in light as a figure flew inside the room. Looking up, Kate Bishop saw Wiccan sporting a different outfit with fiery wings behind him.

-I need to be put in check. But not here. Not anymore. I am dangerous to the whole world… I hurt you all. And I will continue to do so unless I go as far as I can. You will be better off without me.- Wiccan told his teammates.

Suddenly, Billy appeared in the Moon. He looked down at his right hand and slowly opened it, revealing one of Noh-Varr’s Nega-Bands.

-Was it really necessary to call in the Avengers?- Speed asked his teammates, onboard the X-Jet piloted by Beast. Professor X and Mr. Fantastic were traveling on it as well.

-They intend to gather some of the brightest minds in the planet.- Prodigy explained. -Tony Stark and King T'Challa fit in that group easily.-

Slowly, the Blackbird landed. The doors opened and a group of women wielding spears were waiting for them.

-Welcome to Wakanda.- One of them said, stepping forward. -I am Okoye, General of the Dora Milaje. Follow us.- She ordered, as she started marching inside the Royal Palace of Wakanda.

-Wow…- David muttered, looking around. He had never seen a place like Wakanda.

The Dora Milaje led them to a room, where Iron Man was already waiting for them.

-What did you do now, kids?- Tony Stark asked, visibly annoyed.

Black Panther walked inside the room and the Dora Milaje crossed their arms over their chests, to which the King replied doing the same gesture.

-I told you to stay away from trouble back in South Korea, did I not?-

-That was the very reason we removed you from the team. To keep you and everyone else safe.- Stark shook his head, pacing around the room. -Do you realize what you have done? Other than bring multiple Kree ships into orbit.-

-So he knows about that too…- Noh-Varr whispered to Kate.

-The Phoenix Force would have come to William or someone else eventually.- Professor X defended the Young Avengers.

-But they sped up the process, didn’t they?- Tony pointed at them with his index finger, a statement Xavier couldn’t argue. -This Earth has had more than its fair share of invasions and attacks. The Chitauri, Ultron, Kang… Twice!-

Suddenly, a portal was opened and Dr. Strange walked inside the room, followed by Wong.

-Where is William?- The Sorcerer Supreme asked.

-They don’t know, wonderful.- Stark shook his head, placing his palm on his forehead.

-Instead of blaming us maybe we could be searching for him!- Teddy spoke up.

-Teddy…- Kate whispered, trying to stop her friend, as the Dora Milaje pointed their spears at him.

-No! Billy, a potential omnipotent being I might add, is somewhere, half-possessed by a cosmic entity with destructive tendencies and they would rather blame us than help us find him.-

-Stark, he is right.- T’Challa told him and his bodyguards put their weapons down. The other geniuses agreed with Dorrek as well.

-Oh, please, now you’re all siding with them?- Tony threw his head back, closing his eyes.

-We do need to find him, as soon as possible.- Mr. Fantastic nodded.

-Absolutely. He is a Sorcerer Supreme candidate, which is already dangerous on itself.-

-Add the Phoenix Force and you have a ticking time bomb. And reality itself could be destroyed by it.- Beast explained.

Black Panther led them to the lab, where the men started working on tracing any cosmic energy fluctuation with the Phoenix Force’s signature around the planet.

-They won’t let us help, will they?- Prodigy asked his teammates.

Shuri overheard him and walked at them. -Oh, they will. Wait for them to get stuck.- She chuckled. Then, she turned around and smiled at them. -I’m Shuri, T’Challa’s sister.-

-Shuri is fine.- She shook David’s hand. -Ever since the Phoenix Force attacked us not long ago, I’ve been gathering as much information as I could about it.-

-It’s impossible…- Mr. Fantastic commented, looking at the screen. -There hasn’t been any fluctuation after he vanished from the X-Mansion.-

-What’s your search range?- Shuri asked from behind them.

The Princess shook her head and rolled her eyes, walking to the computer. -Move, coloniser.- She told Iron Man as she got her hands on the keyboard. -You need to extend the range beyond Earth.-

-Outer space?- Dr. Strange looked at the others.

-It makes sense. The Phoenix Force grants its users the ability to survive without food, water or oxygen.- Professor X explained.

-And Billy said he was dangerous to the whole world before vanishing.- Prodigy added.

Extending the range to the whole solar system, Shuri easily spotted another fluctuation in the Moon. -Boom.- She smiled, walking away from the keyboard.

-Thank you, Shuri.- Hulkling smiled, approaching the Princess. -Thank you so much.-

-It’s nothing.- She shrugged. -Now go save your friend.-

As the Young Avengers started running to the Marvel, Iron Man flew in front of them. -Where do you think you’re going, kids?-

-To get Billy?- Speed raised an eyebrow.

-The Phoenix Force is extremely difficult to control. If you make it react, it could be disastrous.- Prodigy explained. -If he sees you there, it will react.-

-Ugh, fine.- Tony rolled his eyes. -But bring him back here.-

The Marvel arrived at the Moon, where Billy was sitting. He had turned Noh-Varr’s Nega-Band into a gun and was aiming it at his head, as tears rolled down his cheeks uncontrollably.

-Billy, stop!- Hulkling flew outside of the ship.

Exalted, the Phoenix Force inside Wiccan made him stand up and use its telekinesis to hold his boyfriend in the air.

-Please… Go away.- The mutant pleaded. -Leave me alone.-

-I won’t! I love you, William Kaplan! I’ve loved you ever since we met and nothing has changed that. No Demiurge or Phoenix Force or anything will change that.-

-Teddy… I will destroy everything. I can barely keep it under control. It will take over me eventually and I don’t want you guys to pay the price. Let me end this here and now. It will be easier.-

-I can’t live without you, Billy. You made everything better. Please… We will find a way to help you. We gathered the brightest minds in the world to help you. They’re all waiting in Wakanda. And they’re willing to set you free from the Phoenix Force.-

Wiccan looked down and closed his eyes. -If it doesn’t work… If things get worse… And if I am gone beyond saving… Promise me you’ll kill me.-

-Promise me, Teddy! Promise me you’ll kill me as soon as it takes over me, so I don’t hurt anyone.-

Wiccan flew towards his boyfriend and kissed him deeply. -I love you, Theodore Altman.- He smiled weakly.

"I told you to stay away from trouble back in South Korea, did I not?" 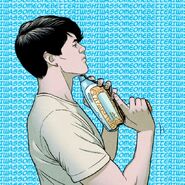 Wiccan holds one of the Nega-Bands against his chin

Wiccan holds one of the Nega-Bands against his chin

"Please… Go away. Leave me alone."

"Promise me you’ll kill me as soon as it takes over me, so I don’t hurt anyone."
Add a photo to this gallery

Retrieved from "https://marvelcomicsfanon.fandom.com/wiki/C%27mon_Billy_(YA)?oldid=219094"
Community content is available under CC-BY-SA unless otherwise noted.