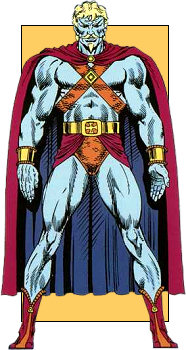 Little is known about Byrrah's life before Attuma's takeover of Atlantis. It can be assumed to be similar to his mainstream counterpart.

When Attuma formed an alliance with the Masters of Evil to help take over Atlantis, Byrrah and Krang assisted him. They opposed the heroes' efforts to turn off the sonic emitters that made the Atlanteans turn against Namor.

Byrrah was a gifted inventor and chemist, an accomplished politician and a master of multiple armed and unarmed combat techniques.

Equipment: Byrrah sometimes used a phosphorescent chest-lamp and an aqua-mask with recirculated salt water supply.
Transportation: None known.
Weapons: He sometimes used a battle lance, a weighted seashell projectile, an energy pistol, a sword and a power-pike with sustained electrical charge.

Retrieved from "https://marvelcomicsfanon.fandom.com/wiki/Byrrah_(Earth-6109.2)?oldid=201589"
Community content is available under CC-BY-SA unless otherwise noted.