"Burn" is the eighth episode of Assemble!'s Season Six and the one hundred and thirty-ninth episode overall.

A rustic farmhouse in Nebraska…

A loud hiss was heard, as smoke emerged from desk.

-It was to be expected.- The enemy of the X-Men shrugged it off. -We proceed, as ever, onwards, toward tomorrow. Oh, and Gordon…- The mutant turned around, headed for the door. -… Please do look after that cough…-

Bobby Drake woke up exalted. His bed and nightstand had begun to freeze. -What the…?- He muttered to himself, sitting up. He stood up and headed himself to the shower, hoping it’d help him stop freezing stuff around him. It helped him as long as the shower lasted, but as soon as he got to his closet to pick his outfit, he froze the doorframe.

-Hey…- Rogue walked to Wolverine. -Is it me or is Bobby acting a little… Odd?-

Wolverine looked back at the teenager, who was sitting alone at lunch, his chair and his portion of the table frozen.

-Now, I’m no expert, but I think it’s his mind that’s out of control and his powers are just showin’ that.-

-Should we get a telepath to figure him out?-

-As somebody who literally absorbs people for a living, that’s a violation of privacy when there’s no need to do so.-

Logan rolled his eyes. -So what do you suggest we do?-

-Sugar, I know you’re not used to this kind of approach, but there’s something called talkin’.- Rogue stood up and walked to her teammate. -Hey, Bobby! Howdy?-

-Of course not.- He smiled slightly.

-Why are you all alone? I mean, you’re usually surrounded by people.-

-I guess I’m giving everyone the cold shoulder… Pun intended.-

-Is there anything you want to talk about?-

-Sure…- Rogue nodded. -Just know that I’m here if you ever need anything, alright?-

-I know, thank you.- He smiled and walked out of the room.

Rogue walked back to Wolverine defeated.

-The wonderful approach didn’t work, huh?- Logan teased her. The woman rolled her eyes and sat down heavily.

-What did you find out, Mastermind?- Magneto asked after the other walked out of his lab.

-He contracted an unknown virus… It’s something I have never seen before.-

Magneto looked into his eyes coldly. -Are you sure, Wyngarde?-

-That’s high enough. We cannot risk the entire population of Genosha just to keep him here.-

-What do you suggest we do? Quarantine?-

-The Genoshan population is composed only of mutants, so those looking after and checking on him will be at risk as well. We are talking about exile here.-

-Who will tell him?-

-I think you can handle a kid… Right, Mastermind?- Magneto raised an eyebrow.

-Then get to it.- The Brotherhood leader ordered, before walking away from the other mutant.

Mastermind closed his eyes and made himself look like Magneto, before walking inside the room where the patient was held.

-St. John…- Wyngarde spoke up, as the young mutant looked up at him.

-Finally.- Pyro stood up, standing by the glass door and placing his palms gently against it.

-I wouldn’t be happy if I were you… You are being exiled.-

-Oh… I know, mate.- St. John smirked, melting the glass with his bare hands. -Magneto would never call me St. John, and of course he sent his lackey to do his dirty job.- Mastermind stopped generating the illusion and walked a couple steps back. -I didn’t make the call.-

-Of course you didn’t… But I’m one of those who thinks the messenger should be killed.- Pyro walked out of the cell, setting everything around him on fire.

-Kill me…- Mastermind smirked up to him. -You’re not going to live long anyway.-

-What?- St. John stopped firing at the scientist.

-Your virus… It’s lethal. I give you some months… A year maximum.- Wyngarde chuckled.

Allerdyce was ready to fire again at the mutant but he was forcibly pulled out of the room by an unseen force, which held him up in the air.

-Pyro, what do you think you’re doing? I thought you were over your arsonist phase.- Magneto asked, holding him up by manipulating the metal in his suit.

-You will be let go. You’re a risk for the Genoshan society. You will be our doom.-

Lehnsherr nodded and let go of the young mutant.

-You fool… I will go, but this city comes with me!- He crouched and blasted a fire stream at the leader of the Brotherhood, who shielded himself with metal scraps scattered along the dockyard.

Using his magnetokinesis, Erik crushed St. John’s gauntlets, which allowed him a better control over his pyrokinesis.

-Taking back what I gave you.- Magneto replied coldly. He pulled off a metal beam and wrapped it around St. John’s body. Lifting him up in the air, Lehnsherr tossed the young mutant on a boat. Hovering over the vehicle, he looked down at Pyro. -If I were you I wouldn’t even think of using my powers… Unless you get along well with water.- He smiled, manipulating the metal on the boat to set its course and navigate itself. -Farewell, St. John.-

The doorbell was rung at Xavier’s School.

-Bobby, can you get it?- Kitty Pryde asked his teammate.

-Yeah, sure.- Iceman shrugged, walking slowly to the door.

The doorbell was rung again.

When he opened the door, his eyes widened. -St. John… What… What are you doing here?- Bobby asked, getting defensive.

-Relax, mate. I’m not here to fight. Magneto… He exiled me from Genosha… And I don’t know where to go.- He shrugged.

-W-What do you mean?- Bobby, raised an eyebrow.

-Hey, don’t worry. We help every mutant who comes to us, no matter what they’re going through.-

-It’s nothing. That’s what we do at Xavier’s.- Iceman shrugged. -Come on in, the Professor will be glad to see you’re back.-

The Legacy Virus is born 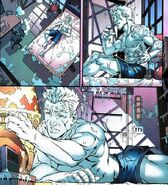 Iceman wakes up at 5 AM

Iceman walks to the shower

Pyro sets everything on fire

"Pyro, what do you think you’re doing? I thought you were over your arsonist phase."

"I will go, but this city comes with me!"

"Taking back what I gave you."

Magneto pushing Pyro on a boat

"We help every mutant who comes to us, no matter what they’re going through."
Add a photo to this gallery

Retrieved from "https://marvelcomicsfanon.fandom.com/wiki/Burn_(A!)?oldid=204484"
Community content is available under CC-BY-SA unless otherwise noted.