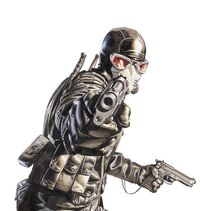 Nothing is known about the man named Bullseye's past. He was born a Mutant with the gift of perfect accuracy and the ability to kill anyone with anything, he even killed someone with a tooth at one point. It is also reported that he enjoys killing others.

When he was arrested by Daredevil in 2014 and interrogated by police, he gave some information about his past, although its legitimacy was suspect.

As an adult, Bullseye used his mutant ability to become a freelance assassin, the perfect job for someone who enjoys murder. Bullseye would eventually go on to build a reputation up to the point where crime lords were willing to pay millions for his services and small-time criminals saw Bullseye as a boogeyman of sorts.

Eventually, the man known as the Kingpin would present enough money for Bullseye to begin working for him. After a few years, Bullseye became the Kingpin's number 1 assassin.

In the year 2014, a load of superheroes would appear in New York but most prominently, the vigilante Daredevil would be a nuisance to Wilson Fisk. When Daredevil would constantly interrupt Kingpin's operations, he came to the conclusion that Daredevil was after him specifically, and that he'd eventually figure out the Kingpin's identity.

Bullseye was ordered to track down and kill anyone working for Kingpin who'd likely give away his identity. When this led him to kill the Fixer in Daredevil's presence, Daredevil would follow Bullseye and engage in a fight with him. Bullseye would injure and defeat Daredevil but he was ordered by the Kingpin not to kill him.

A few weeks later, Daredevil would go on to discover the Kingpin's identity and infiltrate Fisk Industries. Bullseye would then be ordered to kill Daredevil only to be defeated by him after a long and bloody battle which resulted in his arms and fingers being broken. Bullseye would later on be arrested by the NYPD and be incarcerated in prison for a long time.

Enhanced Vision/Marksmanship: Bullseye's mutant ability to throw any projectile with great unerring accuracy and deadliness borders on the uncanny. His uncanny ability to use virtually any common object as a lethal projectile actually makes him more dangerous than many characters who do have superhuman powers. Although he is not technically superhuman, Bullseye can accomplish many feats with thrown projectiles. He has demonstrated the ability to lacerate a person's throat with a thrown playing card, spit his own tooth through a human skull, toss a paper airplane to a distant rooftop, and kill a person with a toothpick thrown through a window from a hundred yards away. He is also a dangerous sharpshooter.

Olympic Physical Conditioning: Bullseye is an Olympic-level athlete and weightlifter. He is in overall exceptional physical condition, with the agility, reflexes, stamina, and speed of a professional or Olympic athlete.

Expert Assassin: He knows every pressure point and vulnerable spot on the human body and is able to turn virtually any object into a deadly weapon capable of incapacitating or killing an enemy. Lester is a deadly assassin often hired by the likes of the Kingpin for covert assassinations.

Master Martial Artist: Aside from his ability to throw projectiles with lethal accuracy, Bullseye is also proficient in many martial arts disciplines and is extremely talented in the use of edged weapons and conventional firearms. Often, his outspoken attitude during combat about using his abilities seems to have become one of his favorite weapons - intimidation. As such, he believes that his attention in the media grants him more effectiveness in combat with a near flawless reputation, rather than an assassin who often uses fear of the unknown.

Weapons Proficiency: As a result of his mutant ability for hand-eye coordination, Bullseye can quickly learn how to wield most weapons even if he's never seen them before. Aside from throwing projectiles, he is also skilled with knives, swords, and other weapons.

Bullseye possesses the normal human strength of a man of his age, height, and build that engages in intensive regular exercise. Bullseye is an accomplished weightlifter and he can lift up to twice his bodyweight, hence Lester can approximately press lift 350 lbs.

Retrieved from "https://marvelcomicsfanon.fandom.com/wiki/Bullseye_(Earth-1111)?oldid=194173"
Community content is available under CC-BY-SA unless otherwise noted.