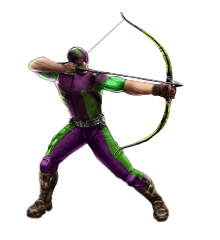 Buck is the criminal archer for Circus of Crime. He is a master marksman and can take out several targets with ease. Originally the role of Trickshot was taken by Clint Barton.

Equipment: None known.
Transportation: None known.
Weapons: He uses a compound bow to fire arrows, many of which have been outfitted with gimmick weaponry. Such effects include:

Retrieved from "https://marvelcomicsfanon.fandom.com/wiki/Buck_Chisholm_(Earth-1010)?oldid=164247"
Community content is available under CC-BY-SA unless otherwise noted.