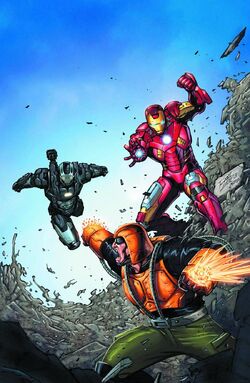 Earth-61615
Base Of Operations
Mobile across New York
Characteristics
Gender

I'm gonna melt your rich-@$$, Stark... And I'm gonna take back every single bits of metal that was meant to be mine from your family's sell-out of a company!

Bruno Horgan was once the owner of a robotics company, specializing on the development a suit that would eventually be similar to Tony Stark's world-renowned Iron Man Armor, though Bruno would later claim that his idea was more unique and easier to be worn and used after seeing the public introduction of the suit. Unfortunate that his presentation to military officials was a failure, as the power source of the suit melted it, in which Bruno tried to show his creation, though the officials still rejected his consideration when he claimed that his creation was finally ready. Following his failure to convince the military, his own company fell into bankruptcy, completely crushing his dreams of becoming a recognizable industrialist and revolutionary roboticist.

As his world comes crumbling down, Bruno's ego and mentality worsens when he saw the commercial success of the Iron Man as he witnesses it flies above the skies of Manhattan, enraging him as he saw the product of the very person he despises become successful instead of his own creation, which he still believes to be the best form of armory and weaponry he could offer to the military. Fueled by his hanger towards the Starks' hypocrisy and entitlement of privilege on the scientific and technological industry for the past few decades, Bruno decided to make a move against Tony Stark by using his Melter Armor. Astonished by its power source, Bruno transferred some of it into a weapon, a ray of his own design. Due to the nature of the powers his armor and weapon gives, he named his armored identity as the Melter.

Sometime after the Chitauri Invasion's Battle of New York, the Melter attacked Iron Man during a press conference in front of the Stark Tower which announces its transition to the Avengers Tower. After knocking down a Stark without the Iron Man Armor, Horgan proudly announced his invention being the Melter Armor and Ray and trying to elaborate how it should've been the groundbreaking tech the country needs instead of the Iron Man Armor, only for Jim Rhodes in the War Machine to confront Horgan, who promptly was defeated and placed into U.S. military custody. Unfortunate for the authorities, it wouldn't last any longer until Bruno was released by a representative of the scientific Advanced Idea Mechanics, who claimed that his inventions and his public broadcast on live television caught the attention and piqued the interest of their superiors.

As Tony's journey as the Iron Man continues to revolve all around the world after the following events of the successfully averted disaster in Sokovia (the Ultron Offensive), more and more threats have eventually started spreading as well, from terrorist organizations to lone enhanced criminals who had a grudge against the Starks, in which the Melter was one of them since he joined alliances with A.I.M., they didn't hesitate to bring panic and terror, just so they can get the attention of the Iron Man. Thankfully, the Ironed Avenger himself had his back-ups to help him handle all these situations not just by himself.

Unfortunately, the next upcoming threat that will be coming upon Stark's way wouldn't be so easy to deal and handle with. Unknown to Tony's knowledge, the Stark Industries had began illegally dealing several goods with several known individuals throughout the black market, and by goods, they meant highly-advanced weapons (both from terrestrial and from extraterrestrial), illegally sold chemical-enhancing serums, and classified technology from various organizations around the world. One of those sold technologies, were revealed to be Iron Man suits and armors, sold all around to various secret terrorist organizations by an unknown seller, a traitor inside the company perhaps. Upon learning this, Iron Man begins a clandestine crusade to destroy all traces of his tech and find and apprehend those individuals or groups who were using it, even if it means facing off against his friends, the US Government or foreign operatives.

After finding out that Advanced Idea Mechanics' Spymaster, was the mole of Stark Industries and the seller of his decommissioned and rejected Iron Man Armors, Bruno would later return in the flesh as one of the Iron Man rogues using the Iron Man Armors A.I.M. has sold to them, wearing a modified and repurposed Iron Man armor as his own, deeming it as his "second greatest achievement." Attacking his the modified Melter Armor, the Melter introduced his greatest achievement afterwards, the Melter MK III, which he proceeded to fire it at the Armored Avenger. While its destructive prowess and lethality proved to be effective against Iron Man and his allies, most notably War Machine, Bruno would later fatally realize how fragile his powerful tech was, and by the second fires an EMP blast to his latest Melter Ray, his weapon backfired and becomes unstable to the point that Bruno himself was too late to fix it back. The ray itself exploded in battle, killing Bruno in the process, much to Stark and Rhodey's dismay that he couldn't save or get the chance to redeem him. Upon hearing about his demise, one of A.I.M.'s superiors George Tarleton acknowledged his gifted mind as a contribution to his scientific community, but was terribly disappointed in his hubris and arrogance, both the flaws that led to his own undoing.

Retrieved from "https://marvelcomicsfanon.fandom.com/wiki/Bruno_Horgan_(Earth-61615)?oldid=265270"
Community content is available under CC-BY-SA unless otherwise noted.