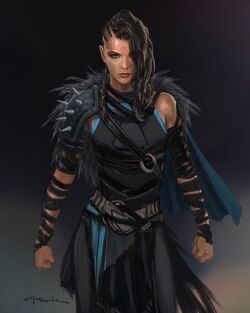 It was once my responsibility to shepherd the dead Asgardian souls to Valhalla. Being the last survivor of my people... I now take solace in knowing when I die... no one will be there to deliver me.

Brunnhilde was one of the most skilled fighters in all of Asgard, which is what helped her rise up to become the head of the Valkyrior. She, and her forces, were called upon by their Prince, Thor, to assist in the assault on Apocalypse.

Brunnhilde was the only one to survive the battle. Horrified by the loss of her people, she donned the title of Valkyrie to deliver each and every one of them to Valhalla before discovering the Bifrost had been cut off from Midgard. She had no way to return home. As long as she was stuck on Earth, she would dedicate each and every breath to killing the tyrant Apocalypse. This is what led to her joining the Avengers to further her mission.

She would eventually form a close relationship with her fellow Avenger, Hercules, who shared the pain of losing Asgard and Olympus.

[[Category: In a Relationship with Hercules Characters]]
Retrieved from "https://marvelcomicsfanon.fandom.com/wiki/Brunnhilde_(Earth-9999)?oldid=245343"
Community content is available under CC-BY-SA unless otherwise noted.